The Man with the Coconuts

This is one of the great humorous stories in english for kids. One fine day, a man goes to gather coconuts. He takes his horse along with a cart. Soon, the man reaches his destination along with his horse. The man finds many coconut trees and even more coconuts. Oh, how delighted he becomes!

He gathers as many coconuts as fast as he could. Quickly he loaded all of them onto his cart. “I gather more than I expected to!” he says. After gathering and loading his horse cart, he begins his journey back home. But by the time, the man came to the main road, it was already afternoon and his home was quite far. Also, read Clever Gretel. 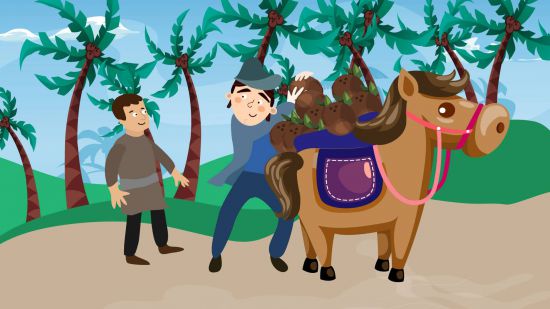 As he was slowly making his way back home, the man met a young boy. “How long do you think it will take me to reach my home?” the man with the coconuts asks the young boy. The boy carefully looks at the man’s cart and then says, “If you go slowly, you’ll reach home faster. But if you hurry, I tell you, it will take twice the time.” After saying that the boy quickly walked away.

Finally, late at night, the man reached his home. Only after reaching his home later than expected, he understood what the little boy had meant. You may also like to read, Gaston And The Many Fools.

Here is a visual depiction of one of the amazing humorous stories in english, “The Man With The Coconuts”. See the video story below,