This is one of the famous Akbar Birbal Stories for kids. There lived two farmers named Abu and Rehman in the Kingdom of Emperor Akbar. They both were neighbors. There was a mango tree between their fields. The tree was full of ripe mangoes. Rehman was about to take some fruits when Abu came there.

“Hey, don’t touch them. The tree belongs to me,” shouted Abu. “No, it belongs to me,” cried Rehman. They continued arguing for a long time until Rehman suggested to put an end to their argument. “We will go to Birbal, the great, who will judge us fair and  square!” suggested Rehman. Also, read The Water In The Well. 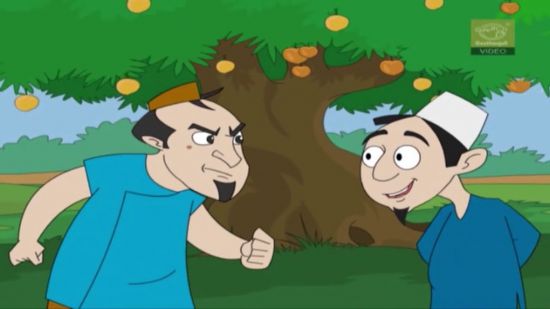 Image Source@ www.youtube.com. They both came to Birbal seeking justice. Abu said, “Sir, there is a big mango tree on the edge of my farm. It has always belong to me. Now Rehman claims it is his!” Then, Rehman said, “Sir, it belongs to me! I have been watering it right from the time it was a sapling!” Birbal thought for a while and said, “You may go home now. But present yourselves here tomorrow!”

As soon as the two farmers left, Birbal sent for a trusted servant and ordered, “Go to their houses in the evening and tell them that some thieves are stealing mangoes from the tree. Report their reactions to me!”

Next day at Birbal’s court, he asked again that to whom the tree belonged to. But both of them said, “To me!” Birbal said, “Since I find it difficult to settle this dispute, I order that the mangoes be plucked and divided equally between the two. As far as the tree goes, it will be cut down and the woods too will be equally divided!”

Abu felt happy because he is getting both mango and a part of the tree. On the other hand, Rehman felt sad. Abu said, “You are fair and just, Sir!” “Sir, I have watered and cared for the tree for more than ten years. I can’t see it destroyed. Let Abu take the tree!” requested Rehman.

After listening both of them, Birbal concluded that Rehman is the rightful owner and Abu was punished for telling a lie. You may also like to read, Tenali Raman And The Proud Priest.

Here is a short visual depiction of one of the famous Akbar Birbal Stories “The Mango Tree”. See the video story below,