The Merchant And His Parrot

This is one of the popular Arabic stories for kids to read. Once upon a time, there lived a rich merchant. He had a beautiful and lovely life. The merchant used to travel a lot. He rarely stayed back to his house.

One day, in the market, he saw a parrot. “Sir, Please come! This parrot will be your great friend,” cried the parrot seller. The merchant was anxious to see the parrot. “Sir, please take it! It can talk well and it can tell you whatever happens at your house in your absence,” said the seller. “Is it? Can it talk well?” “Is it? Can it talk well?” asked the merchant. “Yes, I can guard your house well!” the parrot said. The merchant bought the parrot from the seller and took it to his house. Also, read A Wise Parrot. 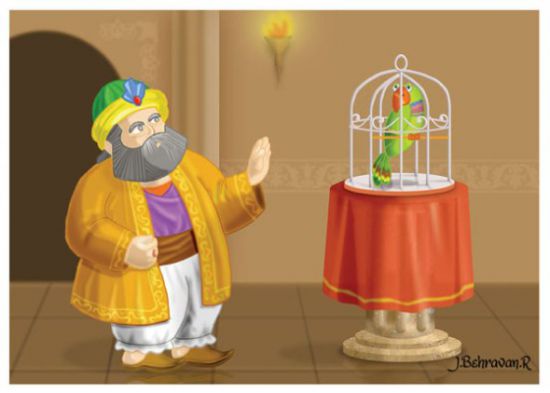 Image Source–> alirezabank.wordpress.com. From that day, the parrot started telling everything to his master, whatever happened at the home. “Shaina, are you taking care of the house or not?” he asked his wife. “Why, what happened?” she asked her husband. “Today, two of our servants have stolen the food and you were dancing in your room at that time,” the merchant shouted. The wife bowed her head, unable to answer.

Days went like this. Shaina got yellings from her husband every day. Shaina decided to kill the parrot. The next day, she called her servants. She ordered, “Keep a handmill under the parrot’s cage and throw water down from above the cage. Also, take a mirror and turn it in front of its eyes from left to right by the light of the candle.” During the night, the servants did as she said.

The merchant came home the next morning and spoke with the parrot. He asked, “What happened last night?” The parrot replied, “Master, the lightning, thunder, and rain disturbed me so much all night long that I cannot tell you what I have suffered.” The merchant got angry and became wild and he knew the parrot was lying. He opened the cage, took the parrot and threw it on the floor. In the process, the parrot lost its life.

A few days later, the merchant understood that his wife had cheated the parrot. He repented for it throughout his life. You may also like to read, The Magician And The Parrot.

Here is a visual depiction of one of the amazing Arabic stories “The Merchant And His Parrot”. See the video story below,

Tagged with: arabic kids stories, arabic stories, the thousand and one nights