This is the fourth part of The Minions short story. Scarlet saw the news on television and gets very angry. She hasn’t forgotten about the minions. One day, as Bob sits for his official royal portrait, Scarlet storms in. “How dare you? You stole my dream! I was going to conquer England someday! There was going to be the coronation and i was going to be made queen. Every moment was planned. I would wear a dress so sparkly it glowed and everyone who ever doubted me would be watching and they would be crying! I was going to be he picture of elegance and class. But you screwed it.”  she yells flushed with anger.

Bob feels terrible. He knows Scarlet is right. A minion’s job is to serve evildoers, not take over their plans! He removes the crown from his head and offers it to his boss. “La crowna para tu,” he says. “No! No! No! King Bob. You can’t just  give up the throne. There are laws,” says the royal adviser. “Laws? Bob maka te laws!” says Bob. 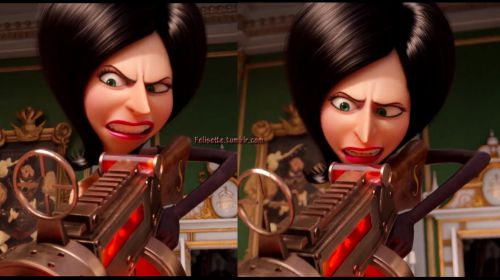 In the final act as King, Bob heads to England’s Parliament to write a new rule. From this moment on, Scarlet Overkill will be England’s new evil Queen. Bob pounds his gave! “La keena pota Scarlet popapail!” he says, presenting her with the royal crown. “I don’t know what to say! I just want to thank the minions! I couldn’t done this without them. Kevin, Stuart and Bob you have stolen not just England, but my heart!” says Scarlet.

The reign of King Bob draws to a close. It is the shortest rule of any monarch in the history of the world. But Bob does not despair. He was a king for all of eight days, but he will be the Minion for life. Bob, Stuart, and Kevin looked forward to being Scarlet’s henchmen again.