The Monkey And The Fisherman

This is one of the best moral stories for kids to read, “The Monkey And The Fisherman“. One day, by a river, sat a monkey. He sat on a treetop observing some fishermen by the river. “What are these fishermen up to?” the monkey thought. The monkey decided to observe the men from afar. He carefully followed every move the men made. Also, read The Monkey and the Dolphin.

First, the two men sat on the bank and talked for a while. They seemed to be deciding something. Then, one of the men rose to their feet and dusted his clothes. After that, he rolled up their trousers and waded into the river after picking up the net. “What does the net do?” the monkey wondered, more interested than ever. 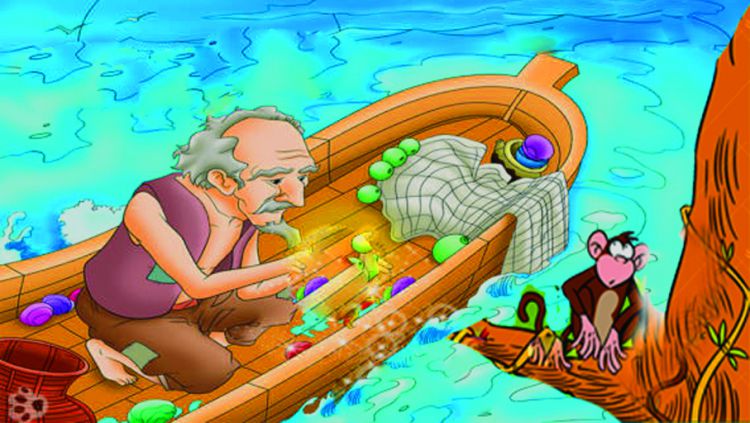 Image Source –> www.moralsforchildren7.blogspot.in. The man waded through the river holding the net. After a while, he came out of the river to join his friend on the bank. The monkey did not understand any of it. Then suddenly, the monkey saw a big splash of water in the river. The men got to their feet and pulled the net. When the men returned the monkey realized they had been trying to catch fish.

After struggling for a while with the fishes in the net, the men got the fishes out of the net. The men were sweating. “Let’s take a break,” one of them suggested. So, it was decided and the men took a break. The men hurried off to someplace, only leaving behind their tools and nets.

The monkey had been observing keenly from the treetop. And now was his chance. The monkey hurried down the tree and ran to the nets. He observed the nets at first. “I shall fish too!” decided the monkey.

As all monkeys are, this monkey was no different. He too wanted to imitate the fishermen. So, he picked up the net and decided to take it to the river. Unfortunately, the monkey could not make it to the river bank. The poor monkey got tangled in the net. The more he tried to wriggle out of it, the tighter the net became. Also, read Monkey And The Cap Seller Story.

In an attempt to imitate the men, the monkey had gotten caught in something he did not know. The poor monkey began to panic. Luckily one of the men returned just in time to save the monkey. The man was surprised to see the monkey got in the net, but he pulled the net off the monkey and set him free.

“If you had fallen into the river caught in the net, you would have died,” the man told the monkey. “It is better not to do things that you don’t understand.” The monkey quickly ran away. But that day, the monkey learned a valuable lesson. The monkey swore, “Lucky me, I could have died. I’ll never try to imitate anyone else.”

MORAL: IF YOU GET YOURSELF INTO SOMETHING YOU DON’T UNDERSTAND, YOU MAY VERY WELL BE SORRY FOR IT.