The Monkey And The Shark

This is one of the best tit for tat story in English for kids. Once upon a time, there was a monkey who lived in a tree which grew by the edge of the sea. The monkey looked at the ocean every day and dreamed how it would be to sail there. “How nice it would be if I could swim fast in the ocean,” the monkey would say out loud.

A shark who used to swim nearby noticed the monkey daydreaming and decided to trick him. “Hello, Mr. Monkey,” said the shark. “I see that you want to swim in the ocean. Jump in the water so that I can teach you now!” “Thank you, Mr. Shark!” replied the monkey. “But monkeys will never be able to swim. I guess we were made to sit on the trees.” You may also like to read, The Bird And The Monkeys. 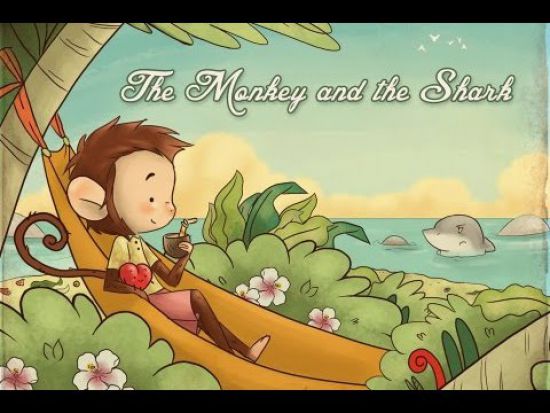 “In that case, why don’t you jump on my back?” suggested the shark. “I’ll take you for a ride and get you back here!” The monkey agreed, quickly jumped to the back of the shark and had had the time of his life feeling the speed of the shark and the wind in his hair.

“I’m glad you’re enjoying the ride, Mr. Monkey,” the shark said. “Because the truth is that I’ve never tried a monkey’s heart and I’ll eat yours!” The monkey stayed quiet for a while and said, “Well, it was foolish of you not to tell me that before.” “Foolish of me?” wondered the shark, “Why is that?” “It’s just that if you had told me this before, I could have brought my heart with me!” the monkey replied to the surprised shark.

“When I go out I leave my heart in the tree and go only with my body. Don’t you know?” the monkey continued. The shark didn’t want to be stupid so he said, “Of course, I knew that! I just forgot about it. Let’s go back to get your heart then.” “Oh, no!” said the monkey, “Take me to your home and eat me, please!” But the shark insisted for them to go back. You may also like to read, Two Cats And A Monkey.

At last, showing great reluctance, the monkey consented grumbling at unnecessary trouble he was put to. When they got back, the monkey climbed up in a great hurry to the tree hiding in the leaves. The shark waited and waited until he finally realized he had been tricked and shamefully swam away never to  be seen again.

MORAL OF THE STORY: PRESENCE OF MIND OFTEN SAVES US.

Here is a short visual depiction of one of the best tit for tat story in english “The Monkey And The Shark“. See the story video below: