The Monkeys And The Bell

This is one of the best short story about animals for kids. Once upon a time, there lived a robber in the village. One day, he went to the temple. He looted all the gold ornaments of the deity and a silver bell from the temple. He had to climb the mountain to reach home. As he was going through the forest to the mountain, the tiger heard the jingle of the bell and became curious to look at the sound. As soon as he saw the robber, he jumped upon him and killed him at once. 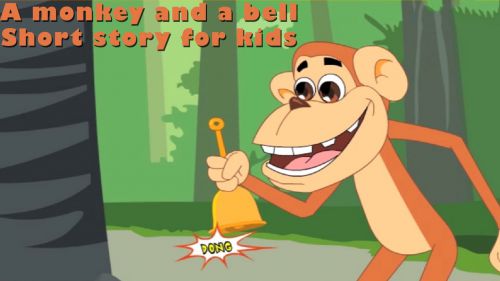 The villagers got together to discuss this mysterious happening. They decided to send a young courageous man to investigate. The young man went up to the mountain and soon reached the forest. There he saw the dead body of the robber. He recognized the robber immediately.

On hearing this, the king announced, “I will give a handsome reward to that person who will solve this mystery.” The old woman didn’t believe in this and she soon decided to go to the forest. There she saw the dead body of the robber. Some ornaments that he had stolen were still nearby. She saw the footprints of the tiger which told the whole story.

Just then, she saw some monkeys playing with the bell. Seeing all this, the old woman had understood what must have happened. She hastened back to the King’s palace and straight to the King. She said, “Your Majesty! If you permit me, I can chase away the evil spirit from the mountain forest and bring back that bell as a proof!” The King replied, “I will be thankful to you! Do you need someone to assist you?” She said, “No Majesty! I just need some fruits and nuts!” She left for the forest.

The old woman went to the mountain forest and she placed some fruits and nuts under the tree. She kept a watch on the monkeys from a distance. When monkeys saw the eatables, they came near the tree and started eating it. As they were busy eating fruits and nuts, the old lady took the bell and left back for the village.

She went straight to the King and said, “Your Majesty! Here is the bell which the evil spirit used to use. They will never came to the forest again.” The King praised her and gave her many gold coins as a reward. Everyone in the village admired her bravery. Since that day, there was no noise and all the villagers lived happily ever after.

MORAL: DO NOT BELIEVE ON ALL WHAT YOU HEAR, INVESTIGATE AND FIND OUT THE TRUTH.

Here is a short visual depiction of this short story about animals, “The Monkeys And The Bell“. See the video story below,