This is one of the amazing grimm’s fairy tales for kids. Once upon a time, there was a widow who had two daughters. The older was charming and hard-working. The younger was ugly and slothful. However, the mother only loved the younger as she was her own daughter. And the mother mistreated the older as she was her stepdaughter. The older had to do all the housework. Read more about Mother Holle.

Day by day, she sat b the well spinning. She had to work so hard her finger bled and the blood fell onto the spindle. One day unfortunately for her, she dropped the spindle into the well. She ran home crying to tell her stepmother about her misfortune but she scolded her and said unkindly, “You dropped it into the well, so you have to go down into the well to fetch it out!” 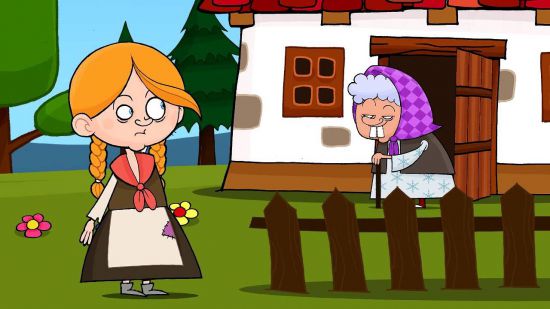 Image Source–> www.youtube.com. The girl ran back to the well but she didn’t know what to do. Too scared to go back to her mother, she decided to jump into the water to find the spindle. But she fainted away after jumping into the water. When she woke up, she discovered that she was in a beautiful meadow full of sunshine and countless fabulous flowers.

She went through the meadow and came to a baker’s oven which was full of bread. Suddenly, the loaves said to her, “Hey girl, please take us out or we shall be burnt to a cinder.” The girl came near and took all the loaves out.

She continued traveling and came to an apple tree. The apple tree said, “Hey girl, please shake me! My apples are all ripe!” She shook the tree and the apples fell like rain until there were no apples left on the tree. She gathered them carefully and kept going.

Finally, she came to a little house. She saw an old woman with big teeth. She was very scared and started to run away. However, the old woman called her back and said, “Don’t be afraid! I’m Mother Holle. You can stay here with me. If you do the housework for me properly, you’ll have a happy life. Just tidy my bed carefully and shake it thoroughly so that the feathers can fly out and create snowflakes down to the world.” The old woman spoke kindly so the girl calmed down and agreed to work for her. Also, read Tatterhood.

Mothe Holle was very happy from the little girl’s work. When she tidied the bed, she tried her best to shake it so that the feathers flew down and became many snowflakes. She treated the little girl kindly and gave her a comfortable life with tasty foods and never spoke angrily to her.

However, after some time, she was homesick and felt sad. She told Mother Holle that she wanted to go home. She agreed and took the little girl to a wide gateway. When the gate opened, the shower of gold fell upon her and the gold clung to her. Mother Holle said, “This is a reward for all your hard work!” Then she gave her the spindle which she had dropped into the well. After that, the gate was closed.

When the girl entered the courtyard, the rooster perched on the well called out, “Cock-a-doodle-doo! Your golden daughter has come home!” Both the stepmother and her stepsister wee stunned to see her covered with gold.

After listening to the whole story, the stepmother became greedy and wanted her own daughter to have good fortune like this. Therefore, she forced her younger daughter to sit by the well and spin. She had to prick her fingers and let her blood fall onto the spindle and then jumped into the well like her sister.

The younger sister finally came to the beautiful meadow and she followed the path. When she passed the baker’s oven, the loaves called her but unlike her sister, the lazy girl refused to help and kept going. After a while, she came across an apple tree. The apple tree called her but she was afraid that those apples could drop onto her head so she ignored the apple tree and kept walking. You may also like to read, King Thrushbeard.

At last, the younger sister came to Mother Holle’s house. She was not scared when she saw her with the big teeth as she already knew about them. She asked to work for Mother Holle immediately. On the first day, she worked hard and listened to what Mother Holle said as she thought about the gold she would receive.

But, day by day, she went back to being a lazy person. She didn’t prepare the bed for Mother Holle and didn’t shake the bed to let the feathers fly out to make snowflakes. That really drove Mother Holle mad. After a while, Mother Holle led the younger sister to the wide gateway. But the golden rain didn’t fall. As she was passing through it was just a great bucketful of tar pouring her. Mother Holle said, “That’s in return for your services!” And she shut the gate.

The younger sister went home covered with tar and the rooster on the well called out, “Cock-a-doodle-doo! your dirty and sticky daughter has come home!” Ever since that day, the tar was stick to her as long as she lived. Also, read The Star Money.

Here is a visual depiction of one of the great grimm’s fairy tales, “Mother Holle”. See the video story below,