This is one of the amazing funny ghost stories for kids. Once upon a time in a jungle lived a little mouse named Squeaky. He was so tiny that he was always afraid of the other larger animals. “I am so small and these animals are so big. What can I do?” the poor mouse thought to himself. Also, read A Little Mouse Who Was A Princess. 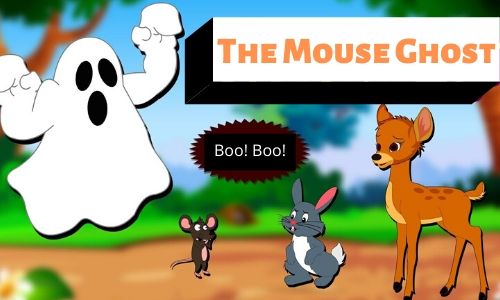 In a couple of seconds, the mouse drew two eyes and lips with that pen. It was made in such a way that it was appearing to be a ghost. “Now, I am going to have fun!” he said happily. As night was approaching, all the big animals started to go back to their houses.

First, there came a rabbit. The rabbit got so afraid after seeing the shadow of the ghost that he ran away at once. Soon, the deer came across the same path. When she saw the house covered with white cloth, she shouted, “Ghost! Ghost! There is a ghost in the jungle!” The mouse was really enjoying this. Even the king of the jungle was now afraid of him. All the big animals changed their way and stopped using that path.

But then, one day, there was a huge thunderstorm. All the animals had no choice but to cross that scary path. All the trees had fallen and because of that the rest of the paths were blocked. “I have to use this path. I hope the ghost is not here,” said the rabbit. However, the rabbit saw the ghost. The rabbit jumped out of fear. You may also like to read, The Mouse That Roared Story.

But, to his surprise, the white cloth flew away and inside it, there was Squeaky. “So, there was no ghost! You fooled all of us!” shouted the rabbit. Soon, all the animals gathered there and drove the mouse away. He could never return to the jungle.

MORAL OF THE STORY: YOU CAN FOOL SOME PEOPLE SOME OF THE TIME BUT YOU CANNOT FOOL ALL THE PEOPLE ALL THE TIME.