The Mouse That Roared Story

This is The Mouse That Roared Story for kids. Once upon a time in the jungle, there lived an old man. He used to live in an old hut. He was known for his magical powers and he used to meditate all day long. Also, read A Little Mouse Who Was A Princess .

One day, the little mouse was roaming near the jungle. He was hungry. So he was searching for food everywhere. He wanted to eat something to fill his stomach. 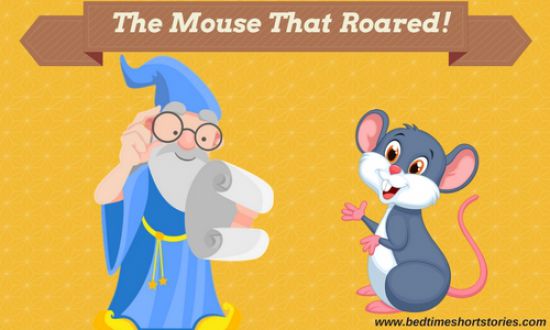 Suddenly, he saw that there was a fox chasing him. He got scared. He wanted to save his life. So, he decided to go to the old man to ask for help. The poor mouse hurried towards the old man. When he reached, he asked the old man, “Oh, old man! Please help me! The fox is chasing me. He will eat me!” The kind, old man used his magical powers and turned the mouse into a tiger.

The tiger was not scared of anyone. He roared loudly and scared the fox away. The fox went sprinting into the jungle. Then, the tiger had a change of heart. He became a merciless animal. He used to trouble all the animals and kill them without being hungry. It became his daily job to trouble each animal unnecessarily.

He was fearful that if the old man found that he was doing the wrong deeds after becoming a tiger, then the old man would turn him into a mouse once again. So, he decided to go and kill the old man. The tiger went to the old man’s hut and saw that the old man was meditating again. You may also like to read, The Lion And The Mouse.

Before he could pounce on him and kill him, the old man turned him into a mouse once again. The old man said to the mouse, “Mouse, you should be thankful to me for saving your life that day. But instead of being thankful, you tried to kill me!” Finally, the mouse realized his mistake. Feeling ashamed, he said, “I am sorry for not being thankful enough to you for saving my life. I didn’t mean to do that!” To this, the old man said, “Now, you deserve to live life like a mouse!”

MORAL OF THE STORY: WE SHOULD BE THANKFUL FOR EVERYTHING WE HAVE GOT IN LIFE.