This is one of the best moral stories for school students. Once upon a time in a small village, there lived a small boy called Ben. Ben had no friends except one secret friend. He used to call him “Chuk-Chuk!” He used to skip school every day to go and meet Chuk-Chuk near a small hill just outside the village.

Every day, Ben used to hear the voice of the train, “Chooooo…” which Ben used to consider as his friend saying “Hello” to him. He also used to make the sound to the train in return. As the train passed by him every day, he used to wave his hand. He thought that the green flag being waved from the train was Chuk-Chuk replying back. Also, read The False Friend. 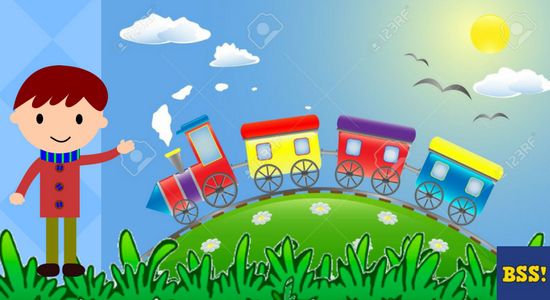 One day, his mother came to know about Ben not attending his school. She decided to make him understand his mistake. His mother told him to go and meet Chuk-Chuk for one last time.

Ben went to the old hill and waited for the train. When the train came, he saw that it was getting slower and stopping. He ran towards Chuk-Chuk as he had never seen it from up close. As he reached there, he saw a hand waving at him from inside he train. Ben decided to get into the train to meet the person who was waving.

When he got inside the train, he saw that the person waving at him was his mother. His mother explained to Ben about Chuk-Chuk and told him that he can make many friends at the school instead of coming there every day. Ben understood his mistake and promised to go to school from then onwards. You may also like to read, A Foe In Disguise Of A Friend.

The next day, Ben was again running towards a train. He even caught the train and climbed into it. But this time, he was only dreaming.

MORAL OF THE STORY: WE SHOULD NEVER TELL LIES TO OUR PARENTS AND THAT IF WE LISTEN TO THEM, OUR WISHES WILL COME TRUE.

Here is a short visual depiction of one of the best moral stories for school students “The Mysterious Friend“. See the video story below,