This is one of the most amazing small fairy tales for kids. “Goodness me, what a lot of dirt and dust there is all over the kitchen floor,” said the maid. She was a very house-proud maid and didn’t like dirt and dust on her floor one little bit. Out came the broom from its place in the cupboard in the corner, and soon the maid was busily sweeping the floor and brushing all the dirt and dust into a big dustpan.

Unfortunately, this kitchen also had elves living in it. They were too tiny to see of course, but if you upset them they could be very mischievous indeed. As the broom worked away, it swept into one dark corner where the elves were having a party. Also, read The Tin Soldier. 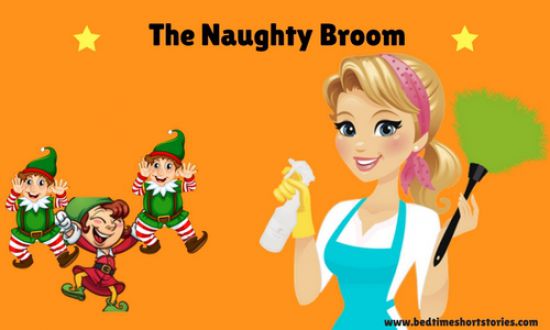 Suddenly, the King elf was swept away from their little table and into the dustpan. The next thing he knew he was being thrown with all the other rubbish on the rubbish tip. Coughing and spluttering with rage, the King elf finally climbed out from under all the rubbish in the rubbish tip and stood on top of it. He picked the dirt and dust out of his ears and nose, pulled a fish bone from out of his trousers and tried to look as King-like as he could. “Who did this?” he squeaked at the top of his voice. “I’ll make someone very sorry, indeed!” he vowed.

Eventually, he made his way back to the house and into the kitchen again. The other elves looked at the King elf and did their best not to laugh. For the King elf was still looking very dirty and untidy, and still had bits of rubbish stuck all over him. But the other elves knew better than to laugh at the King because he was likely to cast a bad spell on them if they had. “It was the broom that did it,” chorused all the other elves. “Right,” said the King elf, “then, I’m going to cast a bad spell on the broom!” Also, read The Most Incredible Thing.

The broom was by now back in its cupboard. The King elf marched over to the cupboard and jumped in through the keyhole. The King elf pointed to the broom and said, “Bubble, bubble, gubble, gubble, Go and cause a lot of trouble!” And with that, the broom suddenly stood to attention, its bristles quivering.

When the maid came down into the kitchen, she couldn’t believe her eyes. “Who has made this awful mess?” she said. She took the broom from the cupboard and swept all the rubbish back outside again.

The next night, the same thing happened. Once it was quiet and everyone in the house was asleep, out of its cupboard came the broom and into the house came all the rubbish again, swept there as before by the naughty broom. This time, there were fish heads, old bottles, and all the soot from the fireplaces. The maid was speechless.

The maid was speechless. After clearing up again, she got the gardener to burn all the rubbish from the rubbish tip, so that nothing else could be brought in. Although she still had no idea how it had happened.

That very night, the naughty broom decided it would make a mess in a different way. So instead of sweeping in rubbish from outside, the broom flew up to the shelves and knocked all the jars to the ground. With a crash, they fell on the floor, one after another and spread their contents everywhere.

“STOP THIS AT ONCE!” demanded a voice suddenly. The broom stopped its mischief. “What do you think you are doing?” said the voice again. The voice had come from a very stern-looking fairy who was now standing on a draining board with her hands on her hips. What the broom didn’t know was that one of the bottles it knocked down contained a good fairy imprisoned by the elves. Now, she was, at last, free, the spell was broken and it was her turn to cast a spell. Also, read The Magic Paintbrush.

“Broom, broom, sweep this floor, Make it cleaner than ever before. Find the elves that cast your spell, And sweep them off into the well,” she chanted. The broom went to work. It seemed to sweep so fast that its bristles just became a blur. Every bit of dirt and dust and all the broken bottles were swept into the dustpan and then out of the house. Then it came back and swept all the elves down into the well where they couldn’t do any more mischief.

In the morning, the maid came down to find a spotlessly clean kitchen. She was puzzled to find some of the jars missing, but between you and me, she was also rather pleased. It just meant that there were fewer things to dust.