This is one of the best Panchatantra Bedtime Stories for kids. Once upon a time, in a dense forest lived a monkey. Even thought the monkey was small, he loved to play tricks and pranks on other animals.Throwing rotten fruits at others was his favorite hobby. And then he would laugh at their discomfort. All the animals of the forest greatly despised this act of the monkey. “When is this monkey going to stop?” the animals complained. Also, read The Monkey And The Wedge.

In the forest, lived a lion. He could not stand the monkey and his pranks. The monkey especially loved to irritate the lion, for he knew he was easily irritated. “If only I could teach that monkey a lesson,” the lion grumbled. But the monkey was always high up in the trees, the poor lion could hardly do anything. 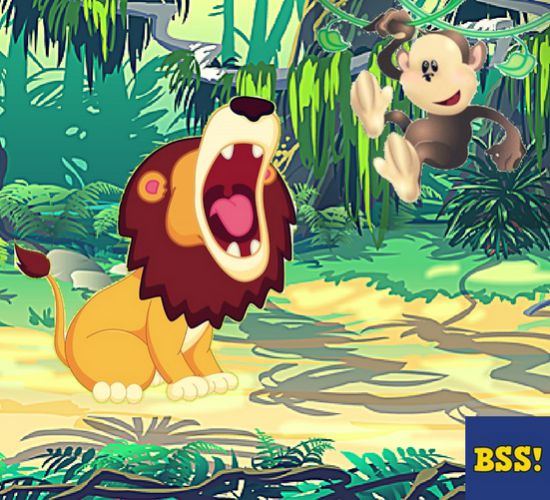 Then one day, as the lion slept peacefully underneath a tree, the monkey decided to irritate the lion again. This time, the monkey especially chose a smelly rotten fruit. “Oh, how fun it will be when the lion will roar in anger!” the monkey snickered. He quietly crept on the branches above the lion and threw the fruit at him. The monkey aimed it right at the lion’s head. Also, read The Dancing Monkeys.

The lion woke up with a jolt, roaring in anger. “You bad monkey!” the lion spat in anger. “I’ll rip you apart if I get my hands on you!” The monkey danced around the branches and dangled down, still far from the lion’s reach. “Too bad, you can’t catch me lion!” he teased. Then suddenly, the branch snapped and down fell the monkey.

Luckily, the monkey landed on the lion’s back. “Now, what are you going to do, naughty monkey?” laughed the lion. The lion tried shaking the monkey off his back. But the monkey held tight, for he knew if he let go he’d be eaten in an instant. “Why aren’t you getting off my back?” the lion had become even angrier. The lion ran from one end of the forest to the other, trying to throw the monkey off. But the monkey did not dare to loosen his grip.

Finally, the lion got tired of running, he went drink some water. The moment lion bent his head to drink water from a pond, the monkey jumped on the lion’s back and made a run for his life. Quickly climbing the tree, the monkey ran away. The lion only roared in anger. “I will stop playing pranks on these animals. I have had enough”, the monkey decided. And since then, the naughty monkey never threw rotten fruits at other animals. Also, read Monkey And The Dolphin Story.