A long time ago, far away in deep jungles of China, lived a nightingale. This nightingale had a beautiful voice. And when she sang, she enchanted everyone who listened to her song. Nearby the jungle, an emperor lived in his grand castle. The castle was made from the most expensive stones. And the king had everything he could ever need. The king had heard about a nightingale who sang in the deep woods that sloped down to the sea. Many travelers had written about the nightingale. Everyone had nothing but praises and declared the bird to be the greatest marvel of the land. 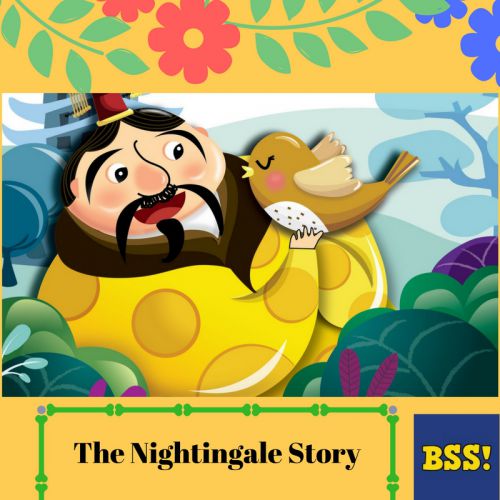 One day the king heard about the nightingale. “Why have not been told of this nightingale?” he demanded. “She shall sing here, this evening or the entire court will be punished!” At once, all the courtiers started searching for the nightingale. The only trouble was, no one knew where to look for it!

Then they found a kitchen boy who had her sing. “Where can we find this bird?” they asked him. “Come with me,” replied the kitchen boy, “I’ll show you the way.” He took them through the woods, straight to the spot where the nightingale was singing. The men were amazed when they heard the bird sing. They were surprised to see that a plain bird could sing so beautifully.

“Little nightingale!” called out one of the courtiers, “Will you come with us and sing in the emperor’s court?” “With pleasure!” the nightingale agreed. You may also like, The Emperor’s New Clothes.

The emperor’s palace was decorated for this very occasion. The floors shone with beautiful lanterns and the most beautiful flowers were arranged in the palace corridors. In the middle of the reception, near the place where the emperor sat, a little golden rod was placed. The rod was for the nightingale.

The grand evening arrived and the nightingale sang its most wonderful song for the court. After hearing the song, everyone was charmed by the nightingale. “You shall have my golden slippers!” the emperor said, deciding to reward the beautiful creature. The nightingale happily declined and told the emperor that it was already happy.

The emperor was so pleased with the bird that he decided to keep her in his palace. He presented the nightingale with a golden cage and twelve servants to watch over it. So, the nightingale sang and sang at the emperor’s court. Soon, the whole of China was talking about the bird. But the poor bird did not feel happy in the cage. The nightingale wanted to be free and sing in the woods.

When the bird was wound, it would sing a song and wag it gold and silver tail. Everyone in the court was amazed at it. “How amazing!” they would cry. The beautiful toy was placed on silk cushion near the emperor’s bed. But the toy only knew one song, unlike the real nightingale.

One day, something strange happened. The ruby studded toy started to make strange noises. And then suddenly, the toy nightingale stopped working. The royal physician was called in and so was the royal watchmaker. Together, they opened up the toy and examined the toy. When they did not understand what was wrong with the toy, more noblemen were called. But sadly, none of them knew what to do!

Meanwhile, the real nightingale, who had been caged, had escaped. She went back to the deep green woods. So, when the toy stopped singing the emperor became very sick. The emperor’s courtiers thought he might die! The poor king lay stiff and pale in his massive bed. The nightingale heard of the sad new.

One night, she flew into the emperor’s chamber and sang one of her most beautiful songs. And when the emperor heard the bird sing, he sat up. The next morning the emperor was smiling happily. He said to the nightingale, “You must always stay with me. You may sing whenever you please and I shall break the fake nightingale into a thousand pieces!”

“No,” the nightingale said, “you mustn’t. The toy did all it could. I can’t build a nest here in the castle. So, let me come whenever I like. And I will sit on a branch and sing to you.” The emperor happily agreed. He had now realized that it was not fair to cage the beautiful bird without her will. The nightingale belonged to the woods and she was a free bird.

When the emperor came out of his bed chambers, looking healthy all the courtiers were shocked. The emperor ruled for many years. And the nightingale visited him whenever she liked. Also read, King Thrushbeard.

Here is a visual depiction of, “Nightingale Story”. See the video story below,