The Orange Boys in Shakespeare Garden

This is one of the best 10-minute bedtime stories for children. Once upon a time, there were five orange boys and their names were Molan, Konan, Bolan, Gonan, and Shonan. They lived with their classical music boxes and their kind rabbits in the  Shakespeare garden of central park. Also, read The Rabbit In The Moon.

“Oh, they still laugh at us,” said Molan in a sad tone. ” I used to hide my face with my hand but they always see me,” said Bolan and his voice were very, very angry. Gonan did not talk with them. Konan and Shonan were the young boys, so crying was the suitable way for them. 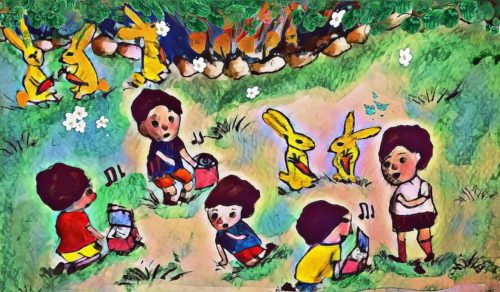 “It’s too late! Our friends are waiting for us, we must hurry,” said Bolan to the orange boys”. ” I don’t have any joyful in my soul, I won’t play any music now, ” said Shonan with eyes full of tears. “What? What about our funny concert with lovely rabbits?” shouted Gonan. “We will fail Gonan, I’m sure, everyone will make fun of us,” said Shonan in a disappointing performance.

But Gonan tried to spread the joyful spirit between the orange boys, so he did his best to encourage them to hurry up because the concert was very important for them, and for their talented rabbits. You may also like to read, The Hunter And The Rabbit. 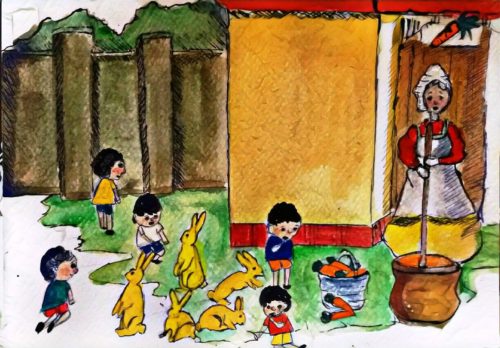 Shakespeare garden was plenty of more and more flowers which speak all the morning and sleep all the evening. The flowers of the garden were two kinds, the first kind is the good flowers which love the orange boys and their talented rabbits. So these flowers inspired them to make good music like fresh air. 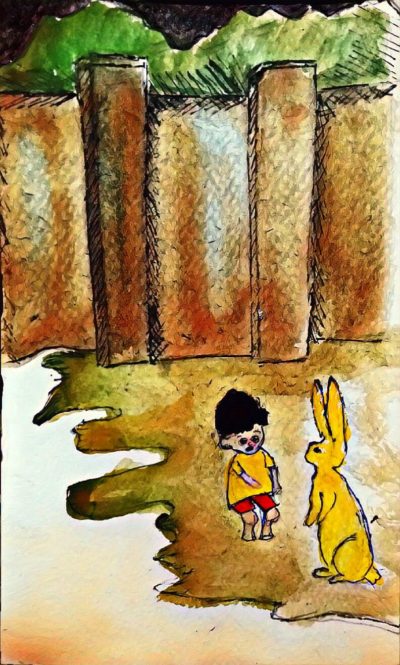 In the past, the orange boys loved all kinds of Shakespeare garden flowers. They used to smell both of them, but now, when they remembered that day in which their faces had been changed from their natural color to orange, they could not love these evil flowers anymore.

Now, I will tell you the real story of changing the boy’s color into orange to know why all the people in the Shakespeare garden laughing at them?

One day, Molan, Konan, Bolan, Gonan, and Shonan were playing in their classical music boxes with their friendly rabbits. Then, Molan rabbit shouted with hurt “My stomach, I’m hungry, I am hungry”. Bolan asked Molan if his rabbit did not eat since the morning, and Molan answered him “no”. Also, read The Boy And The Drum.

Actually, Molan’s rabbit ate his carrot meal in the morning as the other rabbits, but he wanted an extra meal. At that time, there were no carrots in the garden except in the old woman store which was called “Silvia juices”. Silvia was an old woman who used to make delicious carrot juice and sold it to everyone in the Shakespeare garden for money. 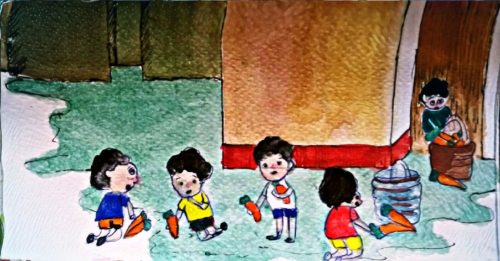 The five boys looked for a way to feed Molan’s rabbit, but they did not find any way.

“Silvia! The solution is the old woman”. Gonan said in a loud. “But, we have no money yet,” Bolan answered him. “We have to wait after our concert, but it will take a long time, and my rabbit is very, very hungry”. Molan said.

The five boys agreed that they will take Silvia’s carrots and after their concert, they will pay her. But the boys did not think of what would Silvia do when she would discover the stealing of her carrots. You may also like to read, An Honest Boy.

On the next day, the old woman asked everybody in the Shakespeare garden about her carrots. Only the evil flowers told her that the boys stole it for their hungry rabbit.

At that time, the old woman ran away towards the sun and made a magic spell that could change the natural color of the five boys into orange as the same orange color of the sun rays on that hot day. 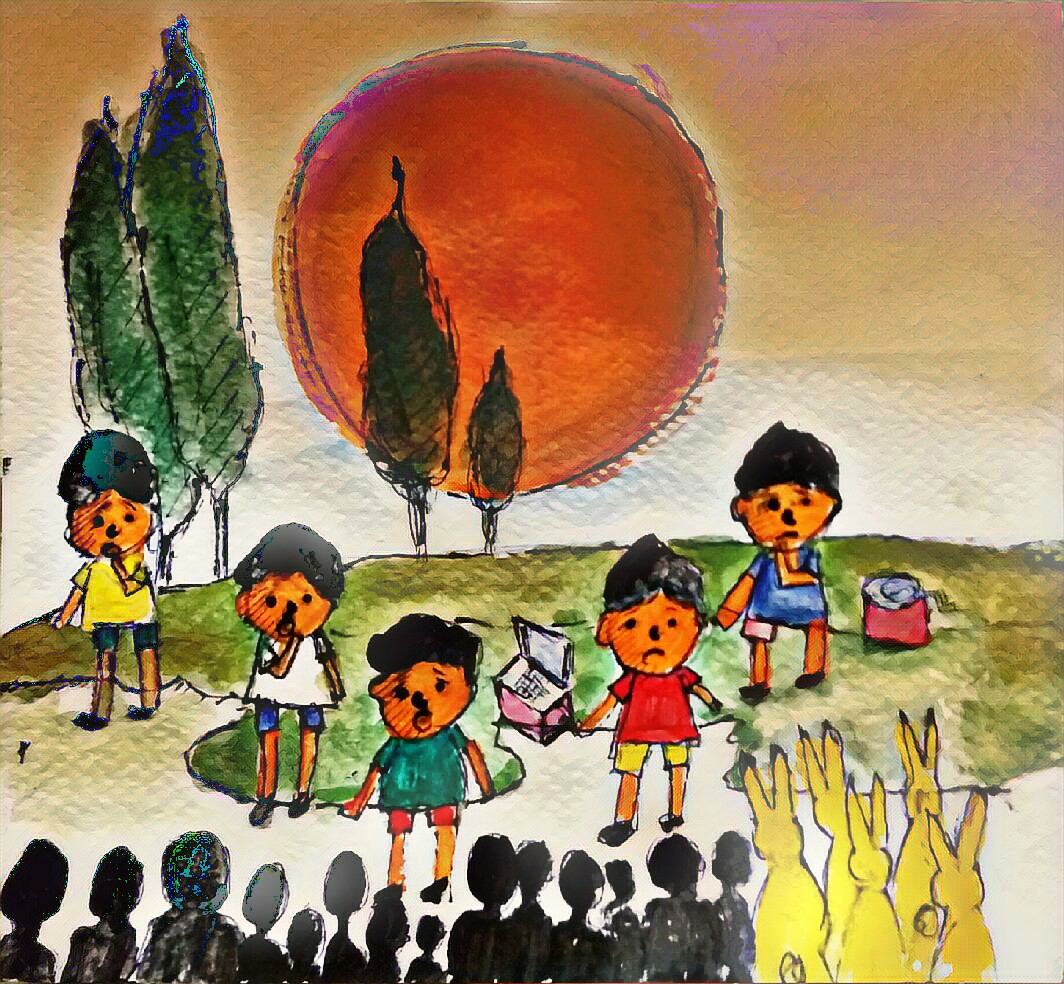 When Silvia made her magic spell that depends on the force of the orange sun, the boys’ faces had been changed into orange color. While they were playing with music boxes with their rabbits in the public concert in the wide garden, that bad matter forced everyone to laugh at them. All the people who gathered around them left their concert.

The orange boys wanted to give Silvia the money for her stolen carrots and apologized to her. But because of this accident, all their concert had been empty, and no one came to listen to their music ever again. Also, read Rabbit And The Falling Sky.

“We must apologize to Silvia”. Shonan said. “She would not forgive us”. Gonan replied. Now, the sun escaped from the wide sky, and the moon took her place without delay,  so the orange boys were very sad, and tired, they slept in the garden next to the good flowers and they dreamed the same dream at the same time.

All the five orange boys saw a kind man with a smiling face. He had blue eyes and a faithful soul was talking to them and gave them more and more carrots which they stole from Silvia. When they woke up, they did not find anything around them, but they still felt good.

Then they started their concert. The boys with their rabbits played music in the Shakespeare garden close to the best good flowers which love their music.

During the playing of orange boys in their classical music boxes, the smell of the good flowers was better. After that, the smell became very inspiring which made everybody take by its charm. You may also like to read, The Rabbit And His Ears. 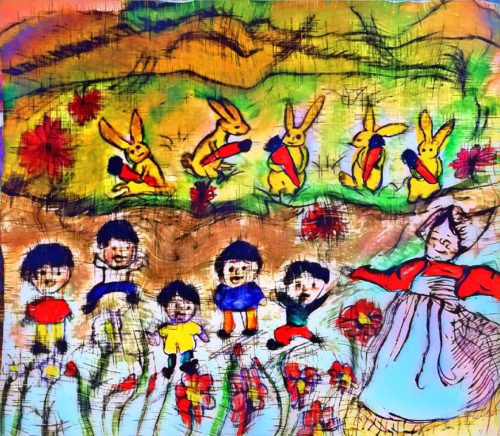 All people in the garden fell in love with the smell. All of them came rapidly to the concert, listening to the orange boy’s music without making fun of them. When the orange boys finished their concert,  they earned enough money. Also, read The Wolf And The Rabbit.

So they went to the old woman,  gave her the money, and sang a beautiful song for her as an apology. Soon, Silvia forgave the boys and their orange color was gone.