This is one of the very short stories with morals which has been adapted from a Zen Story. Once upon a time, a young Buddhist was journeying back to his home. The young Buddhist was travelling alone. It had been long since he had last visited home.

One day, on his journey back home, he came to a river. It was a beautiful day, and the river was shining magnificently. Now, the road chosen by the young Buddhist required him to cross the river. The young Buddhist looked around trying to find a way to get across. He tried real hard, but could not find anything. You may also like to read, Unnecessary Doubts. 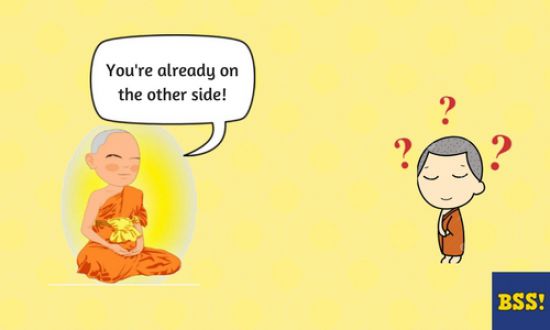 The Zen teacher’s face brightened up at that question. And he answered by saying, “But you are on the other side.”

Just like the young Buddhist in the story, we look for things in our lives. We forget that we already have too much to be thankful for. But every time, we set our eyes on the things we don’t have or possess. We want to get something better.

“The Other Side” here refers to the human desire of getting to the next best thing without appreciating what we already have. The Zen teacher was trying to tell the young Buddhist that he was already there. Like the most of us. Therefore, appreciate what you have. Also, read Control Your Anger.