The Owl And The Lion

This is one of the best jungle animal stories for children. Once upon a time, there was a big, ferocious lion in the jungle. Because he was strong, he bullied every other animal. The animals could no longer live in peace because of the lion. So, they decided to have a meeting where they could find a way to stop the lion from bothering them.

“We need to get rid of this lion!” a hare said. “I believe we need to find a champion among us to go and teach him a lesson.” The animals roared and clapped but the tiger looked to the side, the elephant whistled, the rhino continued to read his book. No animal would volunteer to fight the lion. Also, read Lion And Jackal Story. 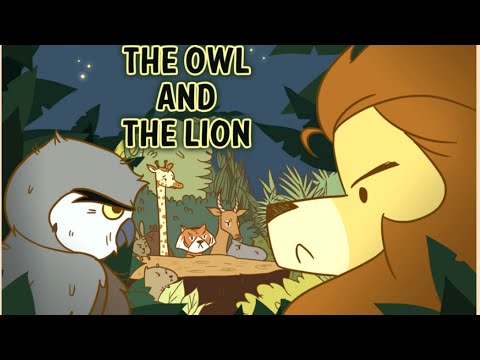 Until an owl came up and said, “Worry not my friends! I’ll fight the lion!” Some animals laughed. Some thought the owl was crazy. But since no one else volunteered, they accepted. The word spread that tomorrow morning, the owl would meet the lion at his den for a fight. When the lion heard the news, he rolled up laughing and laughing.

So, the next day at sunrise, the lion was wide awake waiting for the owl. All the animals were also there but the owl didn’t show up. The minutes passed, the hours passed and still, no sign of the owl was there! The sun was starting to set and all the animals were starting to go home when finally the owl showed up.

“Why are you so late?” screamed the lion. “I’m sorry, Mr. Lion!” the owl said. “But on my way, I saw a huge lion and was so afraid of him. I had to wait until he went to sleep to come here! Oh, I’m glad I have to fight you and not him!” The lion could not believe what he was hearing. “A stronger lion than me?” he asked. “Take me to that lion immediately,” he demanded.

So, the owl took him to a nearby deep well. “Last time I saw him, he went inside!” said the owl. The lion sneaked inside the well and roared as loud as he could. Of course, his own reflection roared back and was magnified by the echo. The roar came five times louder! You may also like to read, The Crow And The Owl.

The stupid lion was so scared that he ran away as fast as he could, never to be seen again. Once again, the owl proved that “BEING SMART IS WHAT MAKES US STRONGER!”

Here is a visual depiction of one of the best jungle animal stories “The Owl And The Lion”. See the video story below,