The Owl And The Pussycat

The Owl And The Pussycat is one of the great poems for children. It is also known as the nonsense poem which is written by Edward Lear. It was first published in the year 1871 in the book called Nonsense Songs, Stories, Botany, and Alphabets.

Lear dedicated this poem to a three-year-old girl, Janet Symonds who was his friend’s John Addington Symonds daughter. The word ‘runcible’ was invented for this poem. So, sing along and here it goes! Also, read Ding Dong Bell Nursery Rhyme.

The Owl And The Pussycat 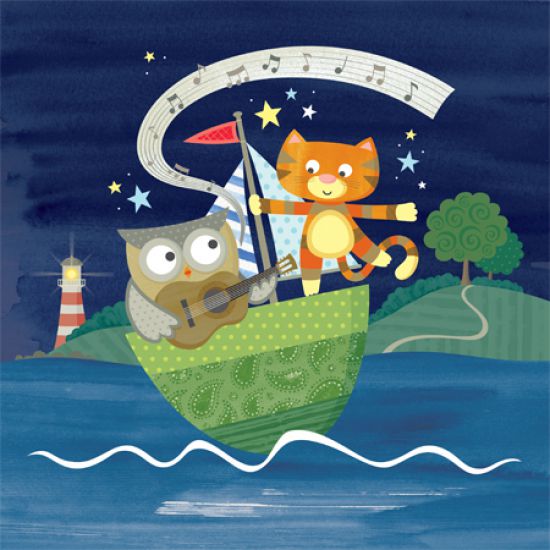 the owl and the pussycat

The Owl and the Pussy-cat went to sea

In a beautiful pea-green boat,

They took some honey, and plenty of money,

Wrapped up in a five-pound note.

The Owl looked up to the stars above,

And sang to a small guitar,

What a beautiful Pussy you are,

What a beautiful Pussy you are!”

Pussy said to the Owl, “You elegant fowl!

How charmingly sweet you sing!

O let us be married! too long we have tarried:

But what shall we do for a ring?”

They sailed away, for a year and a day,

To the land where the Bong-Tree grows

And there in a wood, a Piggy-wig stood

With a ring at the end of his nose,

With a ring at the end of his nose.

“Dear Pig, are you willing to sell for one shilling

So they took it away and were married next day

By the Turkey who lives on the hill.

They dined on mince, and slices of quince,

Which they ate with a runcible spoon;

And hand in hand, on the edge of the sand,

They danced by the light of the moon,

They danced by the light of the moon.

This poem is about an owl and a pussycat who are going to sea in a pea green boat with honey and plenty of money which are wrapped in a five-pound note. The owl sings for the pussycat with a small guitar in his hands. The stars are gazing up at the sky. Within the song, the owl admires her beauty. In return, the pussycat describes the owl as “Elegant Fowl” and admires her singing. She urges to marry but none of them have a wedding ring.

They sail for one year and one day till they reach the land where the Bong Trees grow. The owl and the pussycat get to the land and soon find a pig with a ring on his nose in the woods. Both of them decides to buy the ring for a shilling. And, the next day, they get married by a turkey. In the lovely moonlight, they have their dinner. The beautiful night ends up with a romantic dance hand-in-hand on the sand. Together, they lived happily ever after.