This is one of the awesome moral stories for kids in English. One warm sunny day, a group of little children decides to fly kites. So, they get to making their paper kites. The enthusiastic little children use many kinds of colorful papers. Of all of the kites, one was especially beautiful. All the children marveled at that kite.”Pretty!” they sang while looking at it. You may also like to read, The Brave Little Kite.

Once they were done making the kites, they went to the rooftop and started flying the kites. The wind quickly carried away the almost weightless kites without any problems. 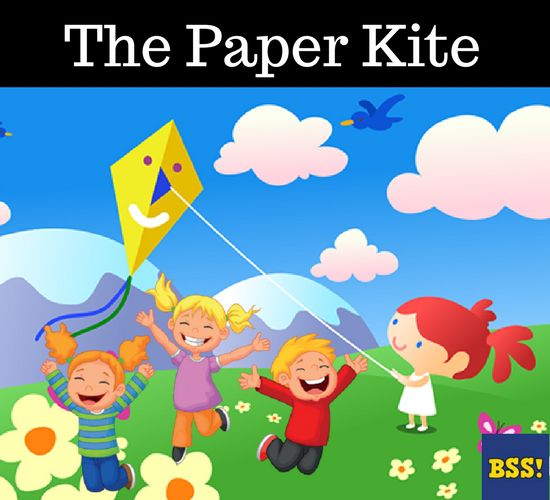 moral stories for kids in english

Now, the beautiful kite saw its reflection in one of the windows. “It is true,” it thought, “I am beautiful.” As it glided away with the wind, it began admiring itself. The kite could not keep its eyes off itself. It flew higher and higher. Much higher than the trees and rooftops. “Look at my pretty paper shining so brightly,” the kite said admiring its body. Also, read The Ugly Tree.

Then, while tugging at its string, the kite thinks, “How sad that I am tied to a string.” It wished to be free. “How nice it would be if I did not have this string to tie me,” it thought. “I could fly even higher than the clouds. Then, I would go further and further away. That would be nice, to be free.”

So, it tugged at the string harder deciding to go towards the clouds. “I want fly among the eagles. And I want to go beyond these clouds,” it said. The kite kept tugging at the string, to go higher still. But the string was too tight. As much as it wanted to go further up, the kite couldn’t. Finally, in the end, the string broke. Momentarily the kite felt a wave of relief. “Finally I am free,” it thought.

The kite could not steer itself anymore. In the pursuit of its freedom, the kite fell cut off its only wings. As a result, the wind took the kite to the sea. Where it fell and drifted away with the tides. “Oh poor me,” the kite cried out, “I only wanted to fly higher!” But nothing could be done anymore.

MORAL OF THE STORY: NEVER LET YOUR AMBITIONS GET THE BEST OF YOU.