The Peasant And The Devil

This is one of the best original Grimm tales for kids. There was a peasant who was working very hard in his field. When it got dark, he was ready to go home. At that moment, he saw a pile of burning coals in the middle of his field. The peasant became very astonished. Also, read The Seven Ravens.

Walking towards it, he saw a black devil sitting on the top of the glowing coals. Turns out, the devil was actually sitting on the treasure. The peasant said, “The treasure is in my field and belongs to me!” “It is yours!” answered the devil. “If for two years you give me one half of everything your field produces.” 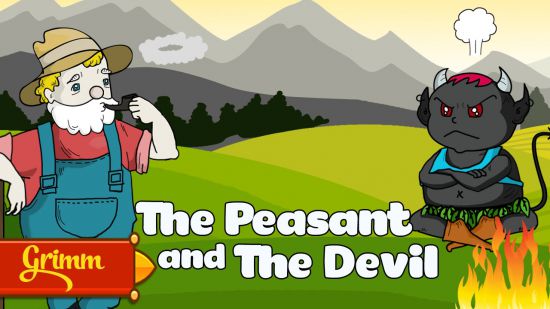 “Okay,” said the peasant. “To prevent any dispute about division, everything above the ground will belong to you, and everything beneath the ground to me.” The devil was satisfied with that and he agreed.

The clever peasant planted turnips for his first crop. When time for harvest came, the devil appeared and wanted to take away his crop. However, he found nothing except the yellow withered leaves. Meanwhile, the happy peasant was digging up his fresh turnips. The devil angrily shouted, “You got the best of this time, but it won’t happen again. Next time, what grows above ground will be yours and what is under, it wil be mine.” The peasant agreed.

This time, the peasant didn’t plant turnips again but wheat. When the grain became ripe, he went into the field, cut the full stalks to the ground, and brought them home. When the devil came, he found nothing but stubble. He became very angry, went away in a fury, and fell down into a cleft into the rocks. Also, read Water Of Life.

That’s how human beings defeat devils. And the clever peasant full of delight went into the field and carried away the treasure.

Here is a short visual depiction of one of the original grimm tales “The Peasant And The Devil“. See the video story below,