The Pied Piper of Hamelin

This is the story of The Pied Piper of Hamelin. A long, long time ago, the people in the town of Hamelin had a big problem. There were too many rats in Hamelin. People tried everything to get rid of the little pests but in vain. There were rats of every color and shape. Even the cats couldn’t do anything. The Chief of the town called a meeting and told everyone that he would give ten sacks of gold to anybody who saves them from rats.

The Pied Piper Of Hamelin Arrives

Finally, one day, a stranger from a faraway land came to Hamelin. Dressed in colorful clothes, he had a feather in his hat and he carried a pipe. He said to the townspeople that he would get rid of rats. Then, the stranger took his pipe and started playing an odd but wonderful tune. All the rats in the town heard the music and began to run to him. As he walked through the streets of Hamelin playing his pipe, more and more rats followed him. 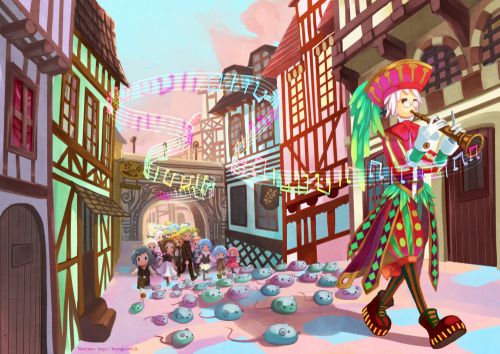 Hamelin Gets Freed Of The Rats

Rats from every corner followed the Pied Piper and his music. The clever man took them all to a river. There, one by one, all the rats fell into the water and drowned. Hamelin was free from rats! The Pied Piper went back to collect his reward. But now that their problem was solved, the greedy townspeople did not want to pay him any money. The Pied Piper was very angry and thought to teach this town a lesson.

A Lesson For Hamelin Folks

Immediately, the Pied Piper began playing his pipe again. This time, all the children in the town heard the music and ran after him. Every girl and every boy of Hamelin began to follow the magical music. The Pied Piper took them all to the cave outside the city and closed the cave door with a huge rock. Only two children were left behind. One little boy had hurt his leg and the little girl couldn’t hear anything. They went to the townspeople and told them what had happened.

Now, the townspeople were very scared and very ashamed of breaking their promise. They went to the cave where the Pied Piper was and begged for forgiveness. They even promised to give him twenty sacks of gold.

Finally, the Pied Piper let the children go. The town of Hamelin had learned never to be ungrateful and greedy. The Pied Piper disappeared, never to be seen again. But they say that sometimes, in Hamelin, if you listen very carefully, you can still hear the beautiful sound of his pipe! Also, read King Midas And The Golden Touch.