The Pig Has Wings

This is one of the great children animal stories to read. Once upon a time, a pig named Henry lived on a farm. He was very ambitious. One of his biggest ambitions was to fly. “I must fly! Why can’t I fly? If birds can fly, I should be able to fly too. Birds fly because they have wings but humans also fly and they don’t have wings. So, if humans can build artificial wings, I can too!” said Henry to himself.

Soon, Henry got an idea. At once, he started to imagine flying like a bird. So, from that day, Henry started collecting birds’ feathers. If any bird drops a feather, he collected it. Soon, he had enough feathers. “These many feathers should do! Now, I will start the next step of the plan,” he thought to himself. Also, read The Little Piggy That Didn’t Shower. 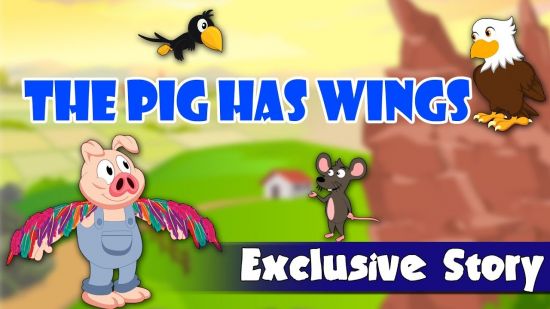 One of his friends, Mousey spotted him doing something secretly. Mousey spotted that Henry was taking glue from the drawer. Henry told Mousey that he would be doing his great invention with these and he would soon be flying. Mousey tried to tell him that this could not be possible. However, Henry was stubborn and told him to come to the hill tomorrow morning. Henry did not bother his friend’s advice and went away from there.

The next day, all the animals gathered to see Henry flying up to the sky. Suddenly, there came a voice, “Henry, Please don’t do this. You will die, you fool! Stop, Henry! I will not let you do this.” It was Mousey. “Go away Mousey! Don’t stop me!” shouted Henry and pushed away Mousey. The poor Mousey laid on the ground.

As soon as Henry began to fly, instead of going up, he was going down. Henry was now scared and understood why Mousey was telling him not to do so. But it was too late now. At once, he fell with a thud, breathless. You may also like to read, The Fox And The Pig.

MORAL OF THE STORY: IF PEOPLE DON’T LISTEN TO GOOD ADVICE, LET THEM FIND THE HARD WAY.

Here is a short visual depiction of one of the children animal stories “ThePig Has Wings”. See the video story below,