This is one of the great children’s fairytale stories. Once upon a time, in a faraway land lived a king and a queen. One night, three fairies visited the queen. All three of them bestowed the queen with some gifts. Also, read The Prince With Donkey Ears. 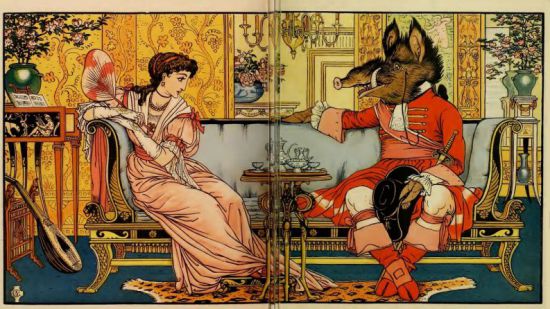 Sometime later, the queen did give birth to a son. And he looked exactly like a pig. At first, the king and the queen thought of killing their own son. But their parental affection took over them and they did not do so.

As the child grew, he learned to talk like a man.  Soon he was talking like a man one moment and the next moment he was wallowing in mud. Whenever he did so, he would come back and nuzzle with his parents. As a result, he made them dirty as well.

One day, the prince told his mother that he wanted to get married. The mother looked for a girl who was willing to marry the pig prince but none wanted to do. So, she asked a woman to let her oldest born marry her son. And in return, the girl would be the queen of the kingdom. The woman persuaded her daughter to marry the pig prince. You may also like to read, Riquet With The Tuft.

Although the pig prince was happy to see the lovely girl, the girl was disgusted. She hatched a plan to kill the pig prince. But the prince overheard the plans and killed her with his hooves. The queen was upset that the prince had killed the girl. But he only did what she had planned for him. So, she began searching for another suitable wife for the pig prince.

Now the pig prince demanded to marry the younger sister of the girl he had killed earlier. The queen did not want to ask the woman for her second daughter. But the prince was adamant. And he threatened to destroy everything if his wishes weren’t fulfilled by his mother. But the same thing happened to the younger sister as well.

Next, the pig prince wanted to marry the youngest daughter of the woman. She happened to be the prettiest of all. And when the prince offered to marry her, she accepted the offer with grace. When they got married, she was happy with him. She was never disgusted by the prince. Also, read The Little Donkey.

One day, when the prince thought she had earned his trust, he told her his secret. The prince took off his pigskin and showed his handsome face. They kept this a secret. But soon the girl told the king and the queen about their son and his pig’s skin.

The next day, day, the pig prince’s parents entered the room when the prince and his wife were sleeping and then they destroyed the pig’s skin. The entire kingdom came to see the prince for who he was. Soon after, the prince and princess had a son. The pig prince sat on the throne and ruled happy. He also lived happily ever after with his family.