The Policeman And The Strange Boots

This is one of the short funny bedtime stories for children. Once upon a time, there was a watchman who used to guard a colony. He was a very hard working and loyal watchman. You may also like to read, The Old Woman Who Lived In A Shoe Story.

One day, a colony watchman was making his rounds. Suddenly, he noticed something brown and shiny under a tree. Moving closer, he saw that it was a pair of boots, quite new. “Now, who could left these here?” the watchman wondered. But there was nobody around to ask. 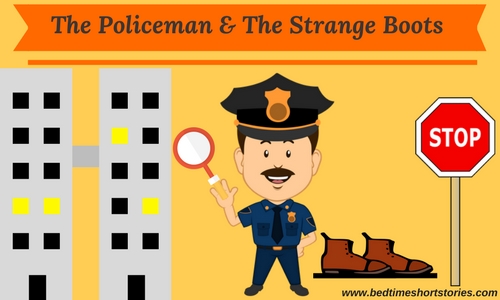 It was afternoon and everyone was indoors. So, the watchman took the pair of boots to the nearest police station. “You may leave them here!” said Mr. Smith, the policeman, pointing to the floor. He was busy writing reports and did not look at the boots carefully.

After some time, Mr. Smith put his pen down and decided to have his lunch. He had taken off his boots because it was very hot that day. As he bent down to wear his boots, he found two pairs lying side by side. “Oh! Which one is mine? They both look alike!” Mr. Smoth thought. It did not matter which pair of boots the policeman put on because they were of the same size. He put his feet into the boots on the left.

From that moment onwards, strange things began to happen to him. As Mr. Smith opened his lunch box, he gazed out of the window and sighed, “Ah! How lucky those birds are, flying wherever they please! How I wish, I were a little sparrow!” As soon as he said these words, the policeman found himself changed into a bird- a sparrow. “Oh, I must be dreaming!” he thought. Also, read The Red Shoes.

He flew out of the window, on the grass and began to look for worms- quite a different lunch from his lunch. But the very next moment, he was surrounded by darkness. A naughty boy had flung his cap over him. The boy caught him and held him tightly. “You naughty boy! Let me go! I am a policeman,” shouted Mr. Smith. But because he was now a bird, the only sound the boy heard was, “Tweet, tweet!” The boy sold the sparrow to another boy who carried him home to his mother.

“What a waste of money!” the boy’s mother said. “This is only a sparrow, a very common bird. Anyway, you may keep it for a day in that empty cage near the window. At least, Polly will be happy.” Polly was a large parrot kept in a big cage. The only words she knew were, “Now, let us be men!” This she kept saying all day long.

Next to Polly’s cage was another bird’s cage, a canary’s. When she saw how unhappy the sparrow was, she said in bird language, “Fly away! Quick!” The naughty boy has forgotten to lock your cage. “The window is open! Fly away! Fly away!” The sparrow quickly flew away straight to the police station. “But how was he to become Mr. Smith, the policeman again?” he thought. You may also like to read, The Elves And The Shoemaker Story.

Then the sparrow remembered Polly’s words and said them aloud, “Now, let us be men!” All at once, the sparrow became Mr. Smith again, sitting in his chair at the police station. The first thing he did was that he quickly took off the wrong boots, locked them in a cupboard and more his old boots again!