This is one of the very short moral stories for kids. Once upon a time, a very poor man lived in a small town. He was poor and very lonely since he did not have a family or friends. He used to sit and beg for food all day long. Whatever he got during the day, he kept on an earthen pot and hung it beside his bed.

One night, the man was very tired from begging all day, so he went to sleep early. The moment he laid down, he was fast asleep. He soon began to dream. He dreamt that he was not poor anymore. He dreamt that he now lived in a very big house. He had lots and lots of money, clothes and good food to eat. Also, read The Hidden Treasure. 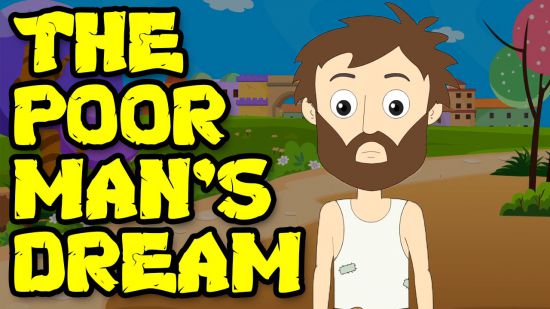 Image Source@ www.youtube.com. He also dreamt that he married a beautiful woman and that they had lots of children. In his dream, he saw that he was playing football with his children in his big house. The poor man began to move his legs really fast in his sleep.

In no time, he hit an earthen pot with his leg very hard and the pot fell down with a THUD. It broke down into many pieces and so the poor man’s dream. All the food that he got that day fell to the floor. The man woke up only to realize that he had been dreaming. He went back to sleep feeling sad and hungry. You may also like to read, The Young Girl And The Hen.

MORAL OF THE STORY: ONE SHOULD NOT BUILD CASTLES IN THE AIR. ONE SHOULD BE HAPPY WITH WHAT ONE HAS AND MAKE THE BEST OF IT.

Here is a short visual depiction of one of the very short moral stories for kids “The Poor Man’s Dream”. See the video story below,