This is the best moral story for kids. Once upon a time, there lived two neighbors named John and Peter. John was a poor farmer. Peter was a landlord. John used to be very happy and relaxed. At night, he never bothered to close the doors and windows of his house. He used to sleep in deep slumber. Although he had no money he was leading a peaceful life.

On the other hand, Peter used to be very tensed always. At night, he was very keen to close the doors and windows of his house. He could not sleep well. Peter was always bothered that some thief might break open his safes and steal away his treasure. He envied the peaceful John. You may also like to read, Gold Coins And A Selfish Man. 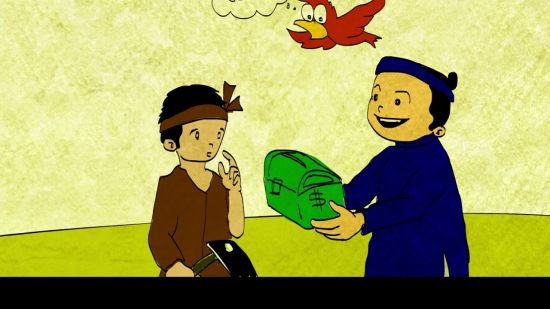 One fine day, Peter called John and gave him a box full of cash. Just then he said, “My dear friend, I’m blessed with plenty of wealth. I find you poor. So, that is why I have decided to give this cash and live in prosperity.” On hearing this, John was overwhelmingly happy. He was joyful throughout the day. Also, read The Poor Man’s Dream.

The next day, John took the box of cash to Peter. He handover the box full of cash to Peter and said, “Sir, though I am poor but your money took away peace from me. Please bear with me and take back your money.” You may also like to read, The Thief And The Donkey.

MORAL STORY FOR KIDS: LEARN TO BE SATISFIED WITH WHAT YOU HAVE AND YOU WILL ALWAYS BE HAPPY.