This is one of the amazing free bedtime stories for kids. The big blue sky with Clouds and Wind raised up the excitement for people to work passionately. Wind pulled Clouds to cover sunshine, brought rain for land to be more profitable. At night, golden Moon and sparkling Stars appeared in the sky. It was a magnificent scene of nature.

One day, God called for Clouds, Wind, Moon, and Stars to award them. “Clouds, Wind, and Moon have done very well to help mankind. Therefore, you all have my compliment and a new outfit,” said the God. They were very much delighted to be complimented and awarded. All of them thanked the God gratefully and then asked to leave. Also, read Renee, The Friendly Cloud. 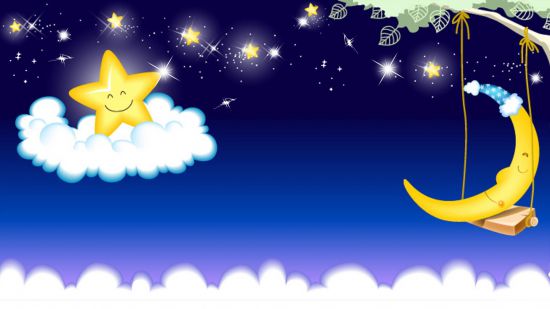 Because Stars were so small, they were overlapped by the Clouds, Wind and Moon. Therefore, God forgot to award Stars. Stars were so sad that they flew home and cried. When the God did not appreciate Star’s work, they became disappointed. Stars went to bed very early every night.

People were familiar with looking at the Stars to predict the whether for the new day. However, they had not seen Stars anywhere for almost a month. The news came to God. He became very furious and called for stars. The God said, “Stars, why are you so irresponsible?” The Stars replied, “Oh, God! You praised and awarded everyone but we didn’t get anything! I thought my work was useless and I stopped doing it.”

“Oh, I forgot! Everyone is equally important. I’m sorry for forgetting you. So, now I’ll award you a new outfit!” said the God. The Stars became happy and said, “Are you serious? We’re important, too? I’m awarded too?” To this, God nodded.

Stars were so happy that they ran around and showed off their gift to everyone. From that day, Stars always fulfill their duty. Every night, Stars worked hard to light up the whole sky, except for rainy nights. Stars are always happy and proud because they know how important they are. You may also like to read, The Little Star And His Mother.

MORAL OF THE STORY: IN LIFE, NO MATTER WHAT JOB YOU ARE ASSIGNED, YOU SHOULD ALWAYS TRY TO FINISH IT.

Here is a short visual depiction of one of the free bedtime stories for kids “The Priceless Gift”. See the video story below,