The Priest And The Robber

This is one of the many amazing funny short stories for kids. In a village, there lived a poor Priest who was religious, honest and very superstitious. One day, a rich landlord was in a big problem but the priest helped him without benefiting himself. The rich landlord promised the poor priest for a gift as a reward. He went to a near-by village to collect his reward. He got a fat and healthy goat as a gift. He was carrying the goat on his shoulders.

On his way back home, three hungry robbers came across his way. They thought of tricking the priest and take the goat away. They soon made a plan. The three of them decided to stop the priest on his way and thought of distracting him. The first robber stopped the priest by making  horror sound effects and said, “Holy God! Such a respectful priest is carrying a dog on his shoulders? It is a sin to touch a dog, a rooster or a donkey.” The priest got angry and shouted,”Can’t you see it’s a goat?” The first one apologized for his mistake and the priest walked away. 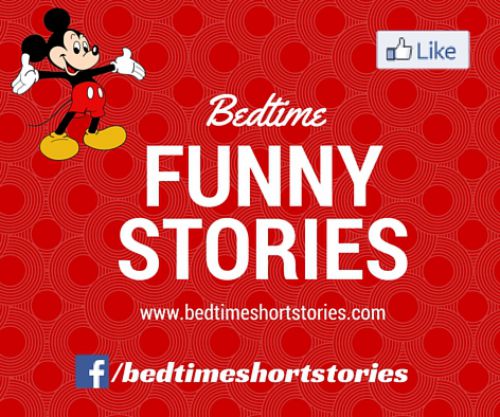 The priest hardly moved some steps ahead and again he met another guy. He was the second robber. “How can a reputed priest carry a dead calf on his shoulder”, he exclaimed. The priest got irritated and said, “Are you blind too? It’s a healthy goat.” He said sorry and the priest started walking briskly. Also read, The Bald Man and the Fly.

Now, it was the turn of the third robber. He stopped him and asked, “Sir, why are you carrying a donkey on your shoulders?” The priest lost his temper and stopped there. The scared priest thought to himself, “Have I been given a ghost that keeps on changing?” He decided not to take the goat and started to run as fast as he could. All the three robbers came out and took the goat along with them and laughed at the stupidity of the priest. 😀