The Prince And The Seedlings

This is one of the awesome Jataka tales online for kids. Once upon a time in a faraway country, there lived a King who had a son called Bharat. He loved his son but was very worried about his behavior. Prince Bharat was a young boy but he had a very fierce temper. The King thought, “What do I do? Most of my courtiers are afraid of him.” In fact, sometimes, King too was afraid of his son’s temper.

One day, his Minister advised, “Your Majesty, there is a wise sage in the forest just outside the city. Why don’t you go and ask for advice?” So, the King visited the sage. On hearing the King’s problem, the sage said, “I will do all I can. Send the Prince to me!” The King went back to the palace and said to the Prince, “Son, tomorrow go to visit the sage in the forest.” You may also like to read, The Prince With Donkey Ears. 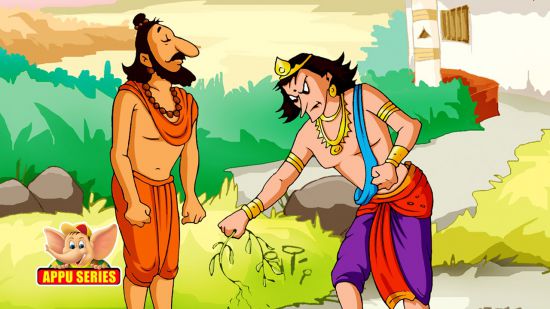 Image Source@ www.youtube.com. The next day, the Prince set out to the forest to meet the sage. Soon, he reached the sage’s ashram. The sage welcomed the Prince and showed him around the ashram. When they reached the backyard, the sage showed him the seedling of a neem plant. “Do you see that seedling?” he asked, “pluck one of its leaves and eat it.”

Hardly had the Prince begun to chew the leaf when he spat it out in disgust. “What a bitter taste!” he shouted in anger. “If this plant is so bitter, I can only imagine how revolting the full grown tree will be! I won’t let it grow,” saying this, he ripped the plant into pieces.

The sage watched this in silence and then said, “If you as young Prince can be so vicious, what will you be like when you are a King? You too will be destroyed like the plant.” The Prince was shocked at these words but knew them to be true. He said, “I understand you, oh wise sage! Thank you for helping me. I promise to mend my ways.”

The Prince returned a changed boy. He kept his promise and went on to become a kind King who was loved by all his subjects. Also, read The Story Of Two Seeds.

Here is a visual depiction of one of the best Jataka tales online, “The Prince And The Seedlings”. See the video story below,