The Prince In The Dragon’s Skin

This is an amazing short fairy tales story for children. Once upon a time, there was a King and a Queen who lived in a golden castle with their beautiful daughter. You may also like to read, A Little Mouse Who Was A Princess.

One night, an ugly ogre captured the beautiful Princess and locked her up in his tall, dark tower. “Help me!” cried the Princess. The King and Queen were very sad. They promised to give half of the Kingdom and their daughter to the Knight that rescued the Princess. 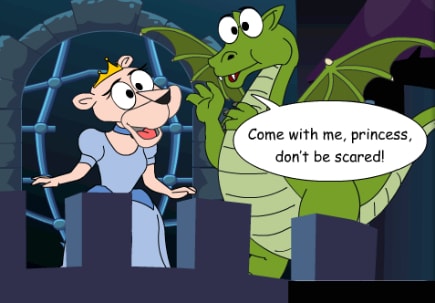 One day, a friendly dragon was flying over the ogre’s tower. Suddenly, he heard the Princess crying for help. The dragon flew down to the tower and saw the poor Princess. He immediately fell in love with her. He took a big fiery breath and blew the ogre far away over the mountains and into the ocean.

The King and the Queen were so happy to see the Princess. The gave Prince half of their Kingdom and their daughter to the Prince. Soon, they both got married and lived happily ever after. You may also like to read, The Pig King.