The Princess And The Salt

This is one of the best short princess bedtime stories for children to read. A very long time ago, there lived a King and his three daughters. 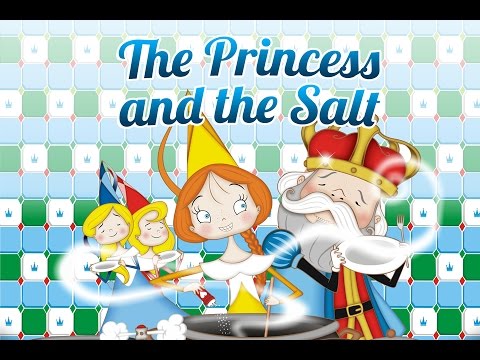 Sad and rejected, the princess began to wander in the forest when suddenly she heard the sound of the horse’s hooves galloping towards her. Frightened princess hid in the hollow of a tree. The horse halted near the tree and a handsome young man alighted. He had seen the princess hiding behind the tree.

“I’m a wealthy merchant,” said the young man. “And I live in the neighboring kingdom. What are you doing all alone in this dense forest?” The princess then told him her story. “I love my father very much but he doesn’t understand,” she sobbed. “One day, he will,” consoled the merchant. They quickly fell in love and soon they were married. The wealthy merchant brought the youngest princess as his bride to live with him in his mansion.

Then, one day, the King lost his way while hunting. For two days, he wandered in the forest. Then, as fate would have it, he reached the mansion of the merchant. Hungry and tired, he approached the merchant, presented himself and sought the young man’s help. Although the merchant knew the King was none other than his wife’s father, he kept quiet about it. “I shall arrange food for you, your majesty,” he said. Also, read The Princess And The Dragon.

The merchant then went to his wife, the princess and told her about her father’s arrival. The princess decided to do the cooking herself and quickly dismissed the cooks. Not long thereafter, a big feast was presented to the King. Starving, he quickly began eating. But then, he realized that the food had absolutely no taste. “What is this? I cannot imagine that someone could ever eat this food like this,” said the King as he demanded to speak with the cook.

Immediately, to his astonishment, there stood his daughter in front of him. The princess said, “Hello Father! Your food is horrible because it does not have salt in it. Your life would be terrible without salt. Wouldn’t it? Do you understand now how much I love you!” The King held his daughter in his arms and apologized to her promising never to doubt the love she had for him ever again. You may also like to read, Princess Rose And The Golden Bird.

Here is a visual depiction of one of the best short princess bedtime stories “The Princess And The Salt”. See the video story below,