The Raven And The Swan

This is one of the great fable tales for kids. Once upon a time, there lived a raven on a huge tree. There was a small pond right after the tree. In this pond lived a swan. The raven was as black as coal. On the contrary, the swan was as white as snow. He was very envious of the swan because her beautiful white feathers.

One day, after thinking for a whole day, the raven finally got an idea. He thought that he too would become like a swan if he lived like a swan. The foolish bird planned to swim and dive in the water all day long. He decided that he would even eat the plants that grow in the water. So he left his home in the woods and flew down  to live on the lakes. Also, read The Wicked Raven. 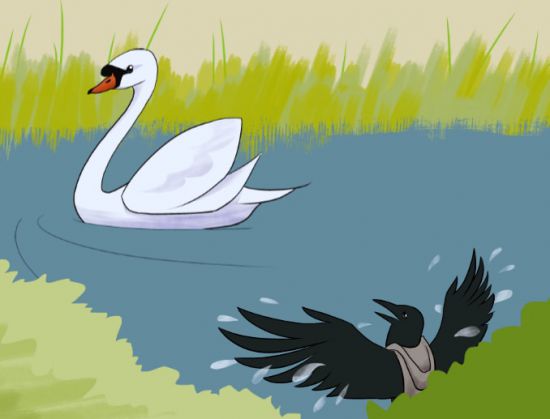 From that day, he washed and washed himself all day long. But his feathers remained as black as ever. He almost got drowned by the end of the day. The stupid bird then ate the water weeds but the food did not agree with him. Soon, he got thinner and thinner as the days passed.

The swan who was constantly looking at the raven advised him, “Go to your home and you will soon recover!” But the raven did not listen to him. It was becoming hard for the raven to be in the water. The raven tried and tried to survive but his condition was becoming worse day by day.

And one day, after fighting for so long, he died. The swan could only pity him. If the raven would have listened to the swan that day, he could have survived for many more days. You may also like to read, The Swan And The Owl.

MORAL OF THE STORY: CHANGE OF HABITS WILL NOT ALTER NATURE.

Here is a short visual depiction of one of the best fable tales “The Raven And The Swan“. See the video story below,