The Resurrection Of Jesus Christ Story

This is The Resurrection Of Jesus Christ Story for kids. Early morning on the third day after Jesus’s death and burial a few of the women decided to go visit the tomb. They planned to take care of his body. But when they came to the tomb, they were shocked to find the stone was already removed from the door.

Angels stood outside the tomb and told the women, “Jesus isn’t here anymore. He has risen!” Mary was standing outside the tomb wondering what had happened. She was confused and thought that somebody had taken Jesus’ body. She did not understand what the angels were saying. Also, read The Last Supper Story. 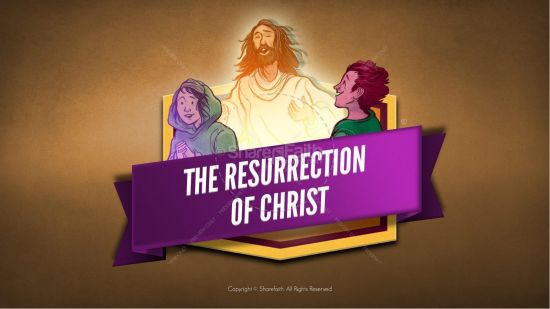 Then she heard a voice behind her saying, “Woman, why are you weeping?” Mary didn’t recognize the voice through her sobbing but thought it must be the gardener who worked near the tomb. “Please Sir, If you have taken his body, please tell me where you put it?”

“Mary!” the voice came again. But this time, Mary recognized the voice. “Teacher!” she said as her heart flared up with gladness. It was Jesus. He was really alive. “Go and tell my brothers,” Jesus said. Mary turned and ran as fast as she could. It was true! Jesus was alive! She had just seen him with her own eyes. She was so excited and could not wait to tell the disciples and all the people that Jesus has truly risen.

Back at the home where the disciples were gathered, Mary rushed into the room. “I’ve seen him. He’s alive! Jesus is alive!” Mary shouted in happiness. The disciples were so surprised that they could hardly speak. They too ran to see the risen Lord. You may also like to read, Jesus Washes The Disciples Feet.

However, one disciple Thomas wasn’t so sure. He could not believe that such a thing could actually happen. He loved the Lord so much. “But did he really rise from the dead? Surely, it couldn’t be! Unless I see his hands, place my finger into the mark of the nails and put my hand on his side. I will never believe,” Thomas said.

One day, Jesus appeared to his disciples as they were sitting in their upper room. He didn’t use the door. He simply walked through the wall. The disciples could not believe their eyes. It was really Jesus. He was alive. He was standing there in person in their midst. Jesus even ate with them so they could truly see that he was a real person and not a ghost. You may also like to read, Easter Story For Kids.

Then holding out his hand, Jesus spoke, “Thomas, put your finger here. See my hands and put your hand and place it in my side. Do not doubt! It’s me!” Thomas turned to Jesus embracing him with great love and affection.

Jesus appeared to many other people and soon word spread of his resurrection. As people retold their count, many more became believers. Everyone marveled at the fact that Jesus, the Son of God came in human form to bring Redemption and Salvation to anyone who would believe. Also, read The Birth Of Jesus.

Here is a short visual depiction of “The Resurrection Of Jesus Christ Story”. See the video story below,