This is one of the most amazing Grimm stories to read for kids. Once upon a time, a prince overcame the great desire of traveling the world. So he took one of his faithful servants and left for his journey. One day, as the two were passing through the forest, they didn’t have a place to spend the night. Then, they saw a young girl walking towards a small house. Also read, Rumpelstiltskin Story.

The young prince went to the young girl and asked, “Dear child, it is getting dark. My servant and I don’t have to place to stay for tonight. Is it possible to find shelter in this little house?”. “You two can stay here if you like. But I must warn you, my stepmother doesn’t like strangers and she practices wicked arts,” the girl replied. As they had nowhere else to go, the prince and his servant reluctantly entered the witch’s house. They found an old woman sitting in a gigantic armchair by the fire. But that night, the prince and his servant ate nothing, as warned by the young girl. 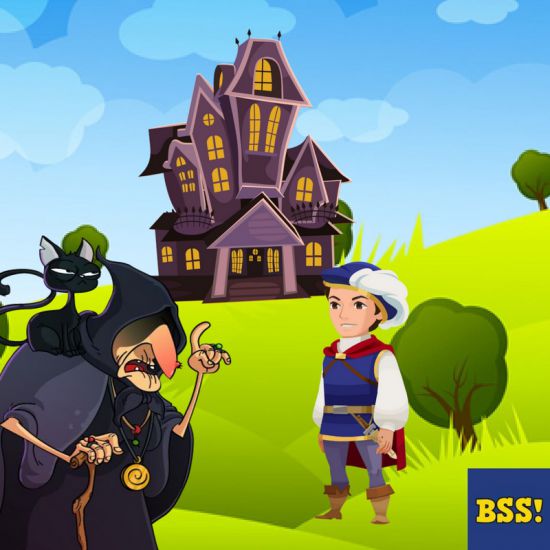 When the morning came the prince and his servant left the house quickly. But before the two could leave the witch said she had something to give them. While the witch went to fetch the things, the prince rode ahead. The witch handed the prince’s servant a jar, which slipped right away from the servant’s hands, onto the horse, killing it instantly. The servant realized it was poison.

Terrified the servant ran away without looking back. As soon as he found the prince, he told the prince what the evil witch had done. The prince decided to go back to the horse, after all, they had to get the saddle back. Upon finding the horse was, they found a raven feeding on the horse. Capturing the raven, “Who knows if we’ll find anything better to eat,” the prince told his servant. You may also like to read, The Queen Bee.

So, at night when they found an inn, they gave the innkeeper the raven to make some soup. Now, the prince and his servant were not aware that the inn was really a den of robbers. As soon as it turned dark, twelve robbers rode in. Before they went about stealing things and killing strangers, they decided to eat the soup the innkeeper had made using the raven.

The moment they ate the soup, all of them fell down, dead. The cause of this incident was the raven, who had been poisoned after feeding on the poisoned horse. In the end, only the prince, his servant, and the innkeeper’s daughter were left alive. The girl had a good heart and had not participated in the evil doings of her father. She even showed the treasure the robbers had collected. “Keep it all for yourself,” the prince insisted. You may also like to read, The Three Feathers.

Next morning the two continued their journey. Soon, they come to a small town. In that town lived a beautiful but arrogant princess, who had announced, “I’ll marry any man, who has a riddle that I can’t solve.” The princess had always claimed three days to solve the riddle. But since she was uncommonly clever she always solved them in less than three days. Though, if the princess solved the riddle, the man had to lose his head.

Nine suitors had already lost their heads when the prince came with his riddle. “One slew none and yet killed twelve,” the prince propounded his riddle. The princess thought hard and long but never could find the answer. So in the end, she sends her servant to the prince to see if he revealed the answer in his sleep. But the maid was found out and chased away by the prince’s servant before the princess’s servant could even make it inside.

Finally, on the third night, the princess herself came to see the prince. She hoped he would reveal the answer to his riddle in his sleep. The princess thought that the prince was asleep, so she sat down next to him. She tried talking to the prince, for she had heard some revealed secrets when they were asleep.

But, the prince was wide awake and knew exactly what the princess was trying to do. She repeated the riddle to the prince, who gave her the answer to it. “The one who slew was a dead raven and the slain were the robbers who ate the poisoned raven’s soup.” Also read, King Thrushbeard.

“What proof do you have for your allegations?” the town judges asked. And so the princess’s robe was produced and then the order came. “Prepare for the princess’s robes to be stitched and embroidered with gold and silver, for she is to marry this prince!” And so the clever princess married the even cleverer prince and they lived happily ever after.

Here is a visual depiction of one of the most amazing Grimm stories, “The Riddle”. See the video story below,