This is The Road Not Taken Summary written by Robert Frost. Even after hundred years, it’s publishing, this poem still continues to captivate many hearts and remains one of the most popular poems of all times.

We all have dilemmas, on a daily basis at times. In times like these, we are often stuck and we hardly ever know which way to go. Many a time most of us, just ponder and ponder over the problem. In the end, choosing whichever way seems easy. Then there are times when sometimes we don’t choose anything at all! Here is a poem, which would inspire you and show what it feels like to be stuck between different opinions and which direction would make all the difference. 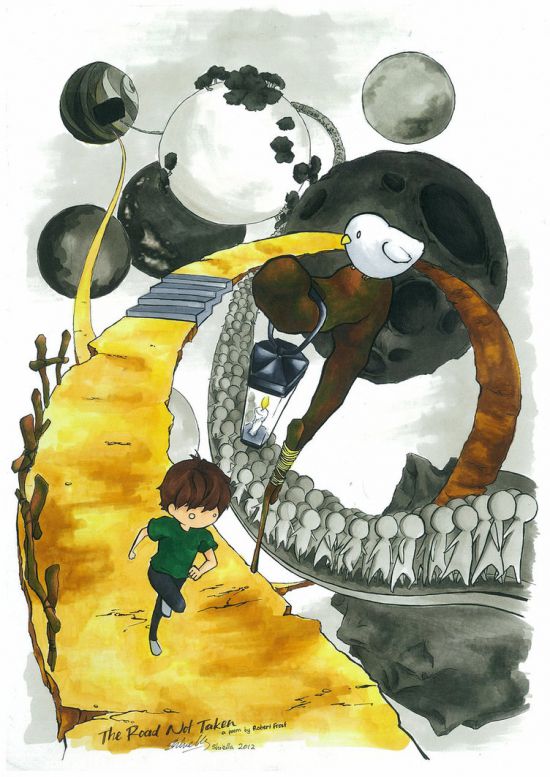 And sorry I could not travel both,

Be one traveler, long I stood,

And looked down one as far as I could

To where it bent in the undergrowth;

Then took the other, as just as fair,

And having perhaps the better claim,

Because it was grassy and wanted wear;

Though as for that the passing there

Had worn them really about the same,

And both that morning equally lay

In leaves, no step had trodden black.

Oh, I kept the first for another day!

Yet knowing how way leads on to way,

I doubted if I should ever come back.

I shall be telling this with a sigh

Two roads diverged in a wood, and I—

I took the one less traveled by,

And that has made all the difference.

This poem gives a strong message about choice. About plunging yourself in the great unknown, doing things that scare us. Here in the poem, the speaker says, “Two roads diverged in the yellow wood, and sorry I could not travel both”. The author means, that he regrets that he’d have to choose one of the paths.  Also, he goes on and symbolizes the easy “choices” with trampled leaves on of the paths. Whereas, the leaves on the other path appear to be trampled upon, suggesting many have not walked that path. Furthermore, the poet says that he does not know where the paths lead. And in the end, years later, he would say that in the woods he came across two roads, and he took the one that was less traveled. That choice made all the difference. All in all, this poem is about the choice the speaker has made. And that one choice changed his life.

A few words about the poem:

So, just as the author, we are challenged with many choices and opinions about many matters in our lives. Often we choose what we see others doing or choose the same direction as others. But then again, if we decide to choose a path that others don’t and walk unafraid, surely we’ll be happy with our choice. For once we choose a path, we’ll never be able to come back.

This poem is about choices of our lives, and we must remember that the easy thing and the right thing are never the same things. The easy thing here in the poem is the road with the “trampled” black leaves. Similar to which in our lives they represent the easy choices. The right thing in the poem is the path which appears to be untouched, with leaves that look fresh with no clear destination. Similarly, in our lives, we are afraid of the things that appear to be difficult.