This is one of the amazing Arabian Nights Stories For Children. Abu Hassan was a rope maker. Each day, he would take little cotton strings and twist them into ropes. He would then sell the ropes in the market but he could not make much money. Abu was very poor. He could hardly earn enough even to buy a meal for his family.

Abu had two rich friends. They were sad to see their friend work so hard and still remain poor. They decided to help him. “We will give you a hundred gold coins. Go and buy a shop with this money. Work hard and you will become rich. We will come and meet you after six months,” they said. Also, read Sheherazade And Shahriar. 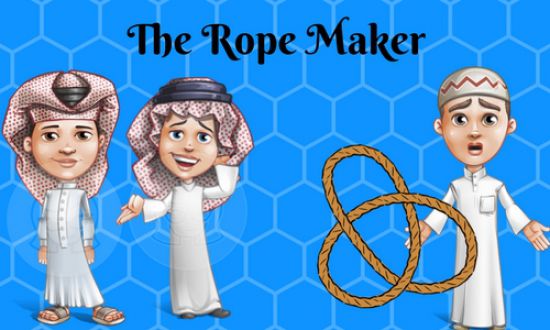 Abu had never seen so much money before. After his friends left, he began to think, “What kind of shop should I buy?” He could not make up his mind. As he looked out of the window, he saw his two sons playing in the field and got an idea.

He decided to take ten gold coins to the market to buy some good clothes and some sweets for his children. He did not want to leave the rest of the gold coins at home. So, he hid ninety gold coins in his turban and put that turban on his head.

Abu bought some clothes and a box of sweets from the market and started for home. He was very happy and was still thinking what kind of shop to buy. He did not seea kite eyeing his box of sweets. The kite swooped down and tried to lift the box of sweets from his hand. Abu held on tightly to the box. The kite dug its claws into Abu’s turban and pulled at it and it came out.

The bird flew off with the turban. Abu shouted, “Catch the bird!” The passers-by heeard his cries. They didn’t know about the gold coins in Abu’s turban. They began to laugh at him. Poor Abu lost his money and became poor once again. He could not buy a shop. All the money his friends had given him was lost forever. You may also like to read, Golden Dreams.

Six months passed and Abu Hassan was still working hard making and selling ropes. When his friends came to see him, they became very upset. “You’ll not become rich with our money! This time we’ll give you something which is useless. Let’s see if you can become rich with this,” they said.

The friends gave Abu a piece of lead. A fisherman lived next to Abu’s house. One night, he asked Abu for a piece of lead. He used to tie the lead to his fishing net. The heavy lead would sink the net into the water. Then the fish would get caught in the net. He had lost his piece of lead and he wanted to cast his net in the sea early the next morning.

Abu was glad to give his piece of lead to his neighbor. “I’ll give you the first fish I actch in the morning,” the fisherman promised gratefully.

The next morning, the fisherman gave Abu a large fish. When Abu cut open the fish, he found a big shining diamond inside. Abu sold the diamond and with that money he bought a shop. He started selling silk from his shop. He became a rich man.

When his friends came to visit him six months later, they were happy to see their friend become rich at last. They were left wondering how a useless piece of lead could make their friend so rich! Also, read The Hunchback’s Tale.

Here is a short visual depiction of one of the great Arabian Nights Stories For Children “The Rope Maker“. See the video story below,