This is one of the best toddler bedtime stories. Bongo, the clown had a bit of a problem. Clowns were supposed to be happy, funny, jolly people but Bongo was a very sad clown. Nothing at all seemed to make him laugh. Whenever the circus came to town people from all around flocked to the big top hoping for an exciting day out. The crowd thrilled to the daring performance of the high-wire act, as the acrobats leaped from one swinging trapeze to the next. Also, read Giraffes Can’t Dance. 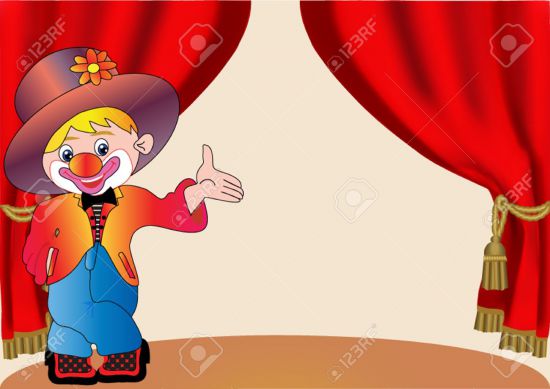 Image Source@ www.123rf.com. But the biggest favorite of the crowd, especially with all the children was the clown. Dressed in his big, baggy trousers, he would enter the circus ring with his funny walk. Everyone laughed to see him. They laughed, even more, when they saw his big, floppy hat with the revolving flower on it. Even his painted clown face made them laugh.

But when his act started, the crowd thought they would burst with laughter. First of all, his bicycle fell apart as he tried to ride around the ring. Then he fell out of his motor car when the tipped up. By the time, he had accidentally poured cold water down his trousers and fallen into the custard-filled swimming pool, the crowd was almost crying with laughter.

But beneath all the makeup, Bongo wasn’t smiling at all. In fact, he saw nothing funny at all in bicycles that fell apart as you used them, or cars that tipped you out as you went along, or having cold water poured down your trousers or even ending up face first in a swimming pool full of custard. He simply hadn’t got a sense of humor.

All the other performers in the circus decided they would try and cheer the sad clown up. “I know,” said the high-wire trapeze acrobat, “Let’s paint an even funnier face on him. That’ll make him laugh.” So, that’s what they did but Bongo still didn’t laugh and was still just as sad.

“Let us perform some of our tricks just for him,” said the seals. So, they sat on their stools and tossed their big colored balls to each other, clapped their flippers together and made lots of honking sounds. But Bongo still didn’t laugh. In fact, nothing that anyone tried made poor Bongo smile. He was still a very sad clown.

Then Percival the ring master spoke, “You know, I think I know what the problem is. There’s nothing a clown likes better than playing tricks on other clowns. Perhaps, if we had the second clown, that would cheer Bongo up.” So right away, they hired another clown called Piffle.

The circus arrived in the next town and soon it was time for Bongo and Piffle’s act. Piffle started riding around on his bike while Bongo pretended to wash the car by throwing a bucket of water over it. Instead of water landing on the car, of course, it went all over Piffle who just happened to be cycling past at that moment. A little smile flickered across Bongo’s face at the sight of the soaking wet Piffle.

Next, Bongo and Piffle pretended to be cooking and Bongo tripped while carrying two huge custard pies. Both landed right in Piffle’s face. Bongo let out a huge chuckle of laughter when he saw Piffle’s custard-covered face.

At the end of their act, the clowns were pretending to be decorators painting up a ladder. The ladders fell down and all the pots of paints landed on the two clowns. Bongo looked across at Piffle, who had a big paint pot stuck on his head with paint dripping down his body. Bongo threw back his head and roared with laughter. Piffle thought Bongo looked just as funny with paint all over his body, too. You may also like to read, The King Who Ate Too Much.

And as for the crowd- they thought two clowns were even funnier than one and they clapped and cheered and filled the big top with laughter. After that, Bongo was never a sad clown again.