This is one of the best bedtime stories for toddlers. Anneena liked knitting. She made a scarf. Anneena’s mother helped her. The scarf was long and warm. “It’s a good scarf,” said Anneena. Biff and Chip, Anneena’s friends came to play. It was a cold day. Anneena put on her scarf. “What a cold day!” she said. Biff looked at Anneena’s scarf and said, “Wow! What a long scarf!”

Biff looked at Anneena’s scarf and said, “Wow! What a long scarf!” “I made it!” said Anneena. “I couldn’t stop knitting.” The children went to the park to play. They started playing near the pond. The pond was frozen, it had ice on it. Some children ran up and they started to pull Anneena’s scarf. “Stop it!” shouted Anneena and her mom. 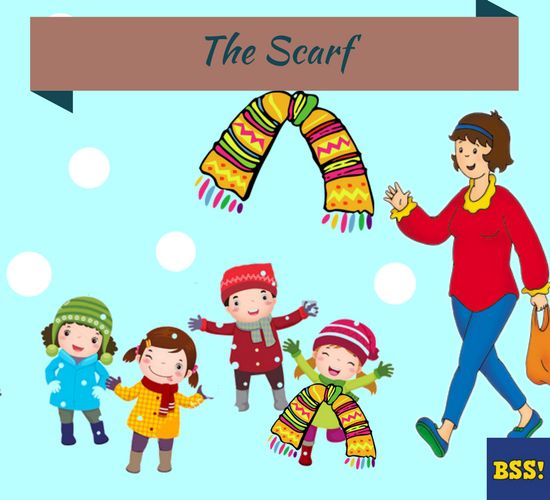 In the very next moment, a boy went on the ice. The ice was dangerous. “Get off!” shouted Anneena’s mom, “The ice is not safe.” Anneena’s mom couldn’t get to the boy as she couldn’t go to the ice. Soon, the boy got trapped inside the ice. Everybody was frightened. “Help!” shouted the boy. Also, read The Little Match Girl.

Anneena had a good idea. She took off her scarf. “Make a rope,” she said. Anneena’s mom made a rope. She made it out of scarves and ropes. She threw it to the boy. Everyone pulled the rope. The pulled the boy out of the icy pond. The boy was safe. “Hooray!” shouted Anneena and her friends.

“I am sorry!” said the boy, “Thank you!” “Ice is dangerous,” said Anneena. Anneena looked at her scarf and said happily, “I am glad I made it long!” You may also like to read, King Midas And The Golden Touch.

Here is a visual depiction of one of the amazing bedtime stories for toddlers, “The Scarf”. See the video story below,