This is The Selfish Giant Story. Every afternoon when the school got over, a few children went to play in a garden. The garden was the most beautiful garden they had ever seen. It belonged to a giant, who had not been home for a while. Also, read The Selfish Giant Illustration.

The garden was large and was full of lovely soft grass. The flowers bloomed here and there over the grass. There were twelve peach trees, which bloomed beautifully in springtime. The blossoms were pink in color and seemed like pearls. And in autumn the trees gave rich fruit. The birds sat on the branches and sang happily. “How happy we are here!” the children would scream happily.

Then, one day the Giant returned. He had gone to visit a dear friend, who lived far away. After seven years, the Giant thought of returning and when he came back, he saw little children playing in his garden. He was infuriated at them. “What are you doing here?” he asked them angrily. The children got scared and ran away. “This is my garden,” the Giant spoke to himself, “I will not let anyone play in it. Only I can play in my garden.”

So, the next day, the selfish Giant started building a wall. The walls were built all around the garden. It kept poor children away. He put up a notice board too. ‘ALL TRESPASSERS WILL BE PROSECUTED’ it said. 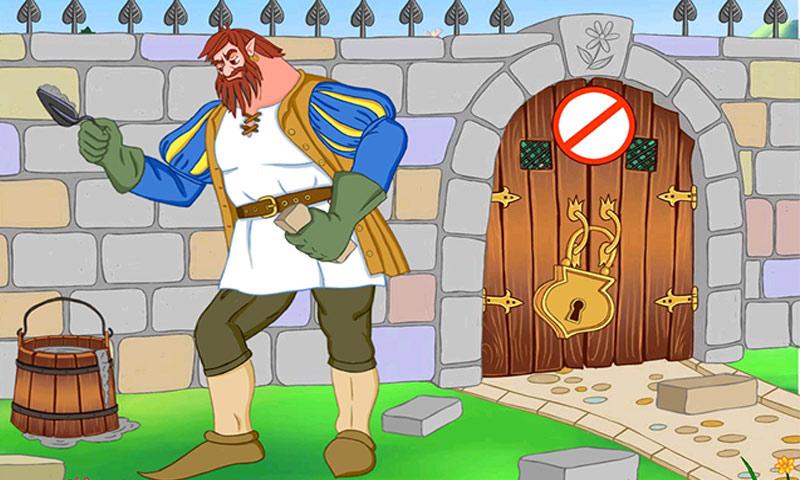 The poor children now had nowhere to play. Every afternoon, after their lessons were done, they used to go around the garden. The tall walls stood between them and the garden. “How happy we were there!”  they said sadly.

Soon, Spring came. All around the country the trees bloomed and little birds sang happily. Only in the Giant’s garden, it was still winter. The birds did not care to sing and the trees forgot to blossom. Soon, the grass started dying and the flowers did not care to bloom. The garden felt sorry for the children, they saw the notice board and were not happy about it.

Snow and frost were the only ones who were pleased with all this. “Spring has forgotten this garden!” they exclaimed. “We can live here all year long!” The Snow covered the grass with a white blanket and Frost painted all the trees silver. Then they invited the North-Wind. He blew and danced around in the Giant’s garden. The Giant was wrapped in thick furs all day. “This is a good spot. Let’s invite hail too,” suggested the North-Wind. So Hail came. And he rained relentlessly all day long.

The Giant didn’t understand why spring won’t come to his garden. He sat at his window every day, looking at the sorry state of his garden. “I hope the weather changes soon,” he prayed. But the Spring never came, nor did Autumn. The Snow, the Frost, the North-Wind, and the Hail were having a merry time in the Giant’s garden.

And then one morning, when the Giant was still in his bed, he heard a beautiful melody. He thought the King’s musicians were passing by. The Giant did not realize it was a Linnet. It had been so long since he had heard a bird sing, that he had almost forgotten how they sounded. You may also like to read, The North Wind And The Sun!

Then, the hail stopped, then the North-wind and soon Snow and Frost were gone too. The Giant could smell the flowers blooming. “Spring has finally come!!” he said excitedly. The Giant quickly jumped out of the bed and ran to his window. Outside his window, he saw his garden alive again. Through a hole in the walls, the children were crawling into the garden.

The Giant ran out into his garden. Upon seeing the Giant, the children ran away. Except one, a little boy he had been trying to climb up a tree in the farthest corner of the garden. Spring still had not reached that corner. The North-Wind was still blowing at full speed. On seeing this, the giant walked up to the little child. The child did not see the Giant coming towards him as he was crying bitterly.

The very next day, he picked up a hammer and knocked all the walls down. “I now know, why the Spring had abandoned my garden. My garden shall be the children’s playground.” From that day onwards, the children used to come and play in his garden.

The giant too played with them. But the little boy, who had hugged the giant never showed up again. The Giant waited and waited, but the boy never came. One day the giant asked one of the children, “Where is your little companion? The one I put on the tree?” They told him that they did not know the little boy. The Giant became quite sad but he continued playing with the children, hoping to see him again. 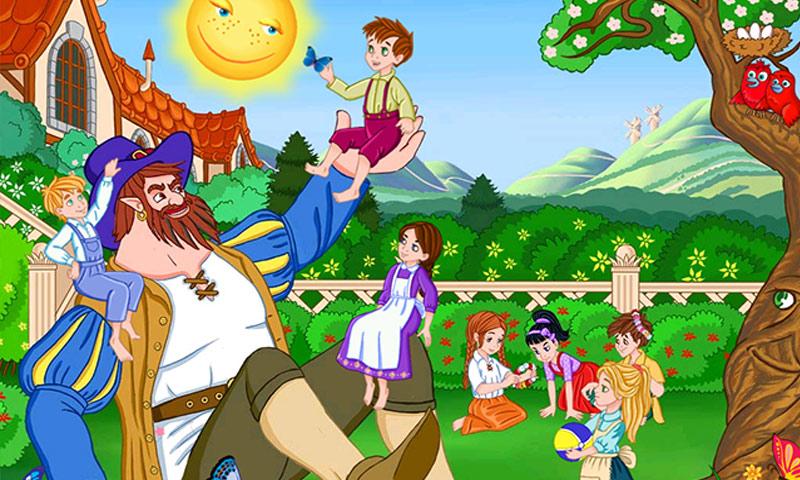 Years passed, and the giant grew old and feeble. He could not play with the children anymore. So he used to sit in a huge armchair near the garden and watch little children play. “My garden is beautiful,” he thought one day, “But these children make it more beautiful.”

One winter morning he looked out of his window while dressing up. He did not hate winters anymore, for he knew the Spring would come again. The giant was surprised at what he saw, in a corner of the garden a tree was blooming. He rubbed his eyes and looked again. The tree was still blooming. It was covered with lovely white blossoms and golden fruit hung from its branches. And underneath the tree, stood the little boy, the very same boy whom the Giant had been looking for.

The Giant quickly ran outside. As the giant came near the child, he became furious. He saw nail marks on the boy’s palms and his tiny feet. “Who dared to hurt you?” asked the Giant.

The child peacefully looked at the Giant and said, “You let me play in your garden one day. Today you shall come with me to my garden, to paradise.”

That afternoon, when the children came running into the Giant’s garden, they found him underneath the tree. The giant lay dead, with a peaceful smile on his face, covered with beautiful white blossoms. You may also read, The Brave Little Tailor!

Here is a visual depiction of, “The Selfish Giant Story”. See the video story below,