The Sheep And The Dog

This is one of the amazing Aesop fable stories for kids. “Oh boy,” said Dodger the Dog, “I can’t wait to chew on this delicious bone!” “Where’d you get that bone?” asked Sharon, the sheep. “The farmer gave it to me,” said Dodger proudly. “He said I earned it by being such a hard worker. ” “A hard worker? All you do is lie around all day. We sheep do all the hard work!”

“Lying around is hard work,” said Dodger. He went back to chewing his bone. Sharon ran off to tell the other sheep. “You won’t believe what I have to tell you,” Sharon said when she reached her friends. “That lazy Dog, Dodger got another treat for being a hard worker.” Also, read The Dog Who Went Abroad. 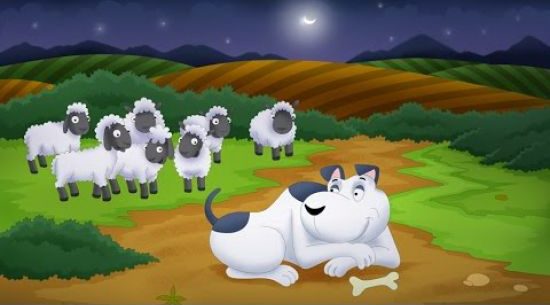 Image Source@ www.youtube.com. “No way,” exclaimed Sophie. “All he does is lie around all day. We give the farmer so much and we never get anything.” The sheep decided that they were going to complain to the farmer. If the dog got treats for doing nothing, they should get treats too.

When the farmer came around with their evening meal, all of the sheep gathered around him. “Farmer, we have something to say to you,” said Sharon. “Go ahead!” said the farmer. “Every day, all Dodger does is lie around but you give him treats for being a hard worker. We provide you with wool, lambs, and milk but we never get any treats.” “Yeah,” piped up Sophie.”All we ever get is grass.” “Is that so? Well, I suppose I’ll have to change the way things are done around here,” said the farmer. The sheep were happy that the farmer listened to their complaints. They couldn’t wait to see what treats they would get.

However, when the farmer came back, he didn’t have any treats for them. Instead, he called Dodger and had the dog follow him back to the farmhouse. “Maybe he’s going to make Dodger work for his treats,” said Sharon. “We didn’t need that lazy dog around here anyway,” said Sophie. Also, read Lambert The Sheepish Lion.

“Oh, Dodger! Thank you for saving us,” said Sophie. “Yes, thank you Dodger,” the other sheep chimed in. “Do you think I am such a lazy dog now?” asked Dodger. “Oh, no! You are our hero!” said Sharon. “I know it might look like I lie around all day,” said Dodger, “but without me, you’d be eaten by wolves and thieves would come and steal you.”

“We are sorry we called you lazy,” said Sophie. “We didn’t realize how much work you really did.” As the sheep started to settle back down, the farmer came out to the field. “Good work, Dodger!” the farmer said. He threw the dog another bone. Even though the dog didn’t look like he worked hard, Sharon and other sheep now realized how important the dog was! Also, read The Farmer And The Dog.

Here is a visual depiction of one of the amazing Aesop fable stories for kids, “The Sheep And The Dog”. See the video story below,