This is one of the best kids stories with moral. Once upon a time, a group of stags lived in a forest. All of these stags got along well and were good friends. They went to graze grass together and did everything together.

One day, one of the stags fell terribly sick. This stag grew weak and could hardly stand all by itself. Not knowing what to do or who to call, the stag decided to sit down and rest. He walked a little further, in hope to find a suitable place for resting. Also, read The Horse And The Stag. 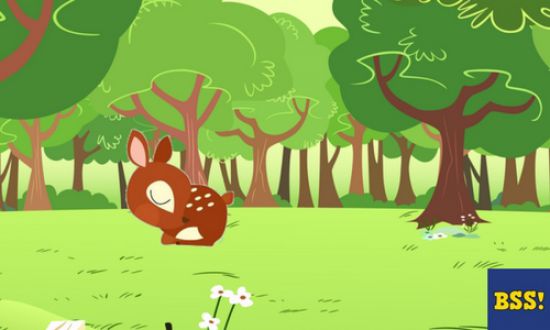 Soon, he found a clearing under the shade of trees. He decided to lay there and wait until he got better. The stag quietly lied down, he was too sick to move about. He couldn’t even get up to stand. So, he decided to wait out the sickness.

When the other stags heard that this stag was sick, they came to visit him. One by one, they asked to see the stag and ask about his health. Whenever any one of them came to see him, they grazed around the sick stag’s area. They would ask how he was doing and begin eating the grass and leaves nearby. All of them did the same thing.

Soon, the grass and leaves were all gone. The sick stag  grew better gradually over time. But, the stag was still too feeble to get up. He wasn’t strong enough to get on his feet and run around looking for food. And all the food around him was gone, his companions had eaten it all.

So, he lay there too weak to get up. And soon passed away not because of his weak health and sickness, but because he had no means to live. There was no food left for him. You may also like to read, The Clever Deer.

MORAL OF THE STORY: EVIL COMPANIONS ONLY LOOK FOR THEIR OWN PROFIT.