This is one of the best panchatantra short stories for kids. Once in a village, there lived a washer man. He had a donkey that helped him carry his loads from house to house. The washer man was not kind to his animal and often did not feed him well. The poor donkey was very sad and weak.

One day as the washer man had gone away to wash his master’s clothes by the river. The donkey stood at the bank waiting for him. Just then, a jackal passed his way. The jackal saw the sad animal and said, “My dear donkey, why are you sad?” The donkey said, “My master hates me and treats me badly! He always put a lot of load on me to carry.” The jackal offered him to come along with him as he would take him far away where there would be sufficient food to eat. 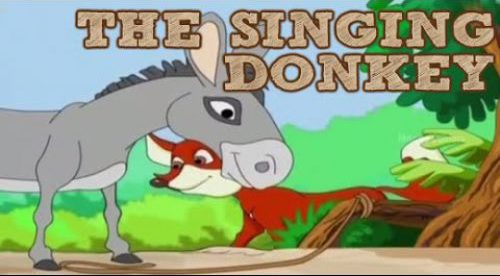 Saying this, the jackal smartly untied the donkey’s ropes and the two of them ran. After a while, the donkey and the jackal came to another village. There, they spotted a fenced patch of cabbages and carrots. All of a sudden, donkey started making noise as he was very happy. The donkey said, “My heart is breaking into a song!” The jackal told the donkey that they should not make any noise otherwise the master of the field would catch them.

But due to donkey’s unusual behaviour, the jackal felt sorry for him and told him to sing after the jackal left from there. The jackal hid behind the nearby bush. When the donkey could no longer see the jackal, he started to twirl and started to shout loud.

Suddenly, the owner of the house came running out and beat the donkey up. When the donkey fainted, his wife said, “Don’t kill him! We can use him to carry our vessels to the market everyday.” The husband said, “That’s a good idea!” He then tied a rope around the unconscious donkey’s neck and he became the slave once again.

Here is a short visual depiction of the best panchatantra short stories for kids,”The Singing Donkey“. See the video story below,