This is one of the classic bedtime stories for kids. In a faraway land, it was bedtime in the palace. The queen had been out all day shopping for a new crown and was now very tired. She even nodded off at the time of desert and now had ice cream all over her face. It was definitely time for bed. “Goodnight, dear,” she said to the king.

The king, on the other hand, was not even a bit tired. He brushed his teeth, put on his nightclothes, and snuggled in the comfort of his royal bed. The king restlessly tossed and turned in his bed but the sleep never came. “It’s no good,” the king said after hours of trying to get some sleep. “I am just not sleepy. Maybe someone in the castle could help me with this.” So he climbed out of the bed and went downstairs. 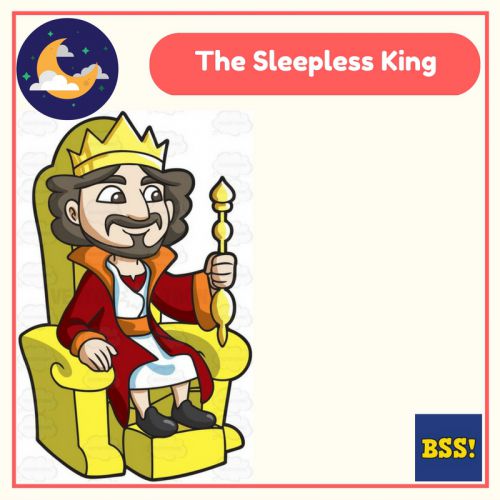 At the bottom of the stairs, the king found the royal treasurer. He was buried with bags of gold and stacks of coins and piles of precious jewels. To him, the king complained about his sleeplessness. The royal treasurer thought for a moment and then said, “I know just the thing that will help you.” He took the king to the royal treasure chamber and gave the king a yellow cloth.

The king started to polish. He polished and polished, till the diamonds glittered, the sapphires sparkled and the coins shone bright but sleep never came to the king. The royal treasurer thanked the king for finishing his work and went off to bed. The king’s problem of sleeplessness was still unsolved.

“Oh, well perhaps a snack will help me go to sleep,” the king thought hopefully. When the king reached the kitchen he saw that the cook was busy making dough for fresh bread. To the cook, the king complained again, “I can’t sleep!” “You have come to the right place!” the cook exclaimed. And told the king how kneading the dough tired the cook and made him sleepy. So the king decided he would make some dough.

Soon the flour was flying and the king was surrounded by a fog of flour. He pushed and pressed the dough. He worked very hard. Soon the dough was done and the cook was off to sleep. The king, however, was still sleepless. The flour got in the king’s nose and he started sneezing. He went out to get some fresh air. Outside, in the garden, the king found the royal gardener hard at work. You may also like, The King And His Three Daughters.

“I can’t sleep,” cried the king. The royal gardener gave the king a tiny pair of scissors and told the king that every blade of grass needed to be of the same height. “It is a tiresome job. It usually puts me to sleep,” he told the king. The king knelt down started cutting the grass. He measured each blade of grass with his fingers and cut them, making sure they were all of the same sizes.

The queen had gotten out of bed, and she was surprised to see the king kneeling in the garden. “Are you alright, dear?” she asked him. “I can’t sleep!” the king told the queen, “And no one can help.”

The queen took the king inside and gave him a cup of milk. After sipping the milk, the king lay down in his royal bed. The queen was about to read a bedtime story to the king when she heard him snoring. Finally, the sleepless king was finally asleep.