This is The Snow Queen Story. Once upon a time, a wicked devil made a strange mirror. All the beautiful and good things reflected in the mirror became distorted and terrible, while everything that was ugly became even uglier than before. In his excitement, the devil carried it to Heaven to play a prank on god. Hardly had he reached Heaven when the mirror shook terribly, flew from his hands, fell to the earth, and broke into many tiny pieces. The mirror fragments were scattered all over the earth. People who got a glass splinter in their eyes would see everything awry. Some people got a bit in their hearts, which began to turn into a lump of ice.

In a large city, there lived two children named Kai and Gerda. They were neighbours and best friends. Everyday, they would read picture book , listen to their grandmother’s stories and grow roses together. One day, splinters of a demon’s mirror suddenly got into Kai’s eyes. From then on, the boy’s personality changed. He found Gerda so ugly and her games so boring. 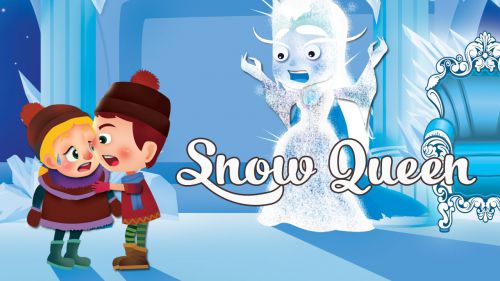 On a winter day, Kai tied his sleigh to another larger one. The strange sleigh took him to a place where there were snowflakes as big as white hens. The woman sitting in the huge sleigh was the Snow Queen. The Snow Queen took Kai up in the sleigh beside her. Kai had never seen anyone as beautiful as the Snow Queen. However, her face seemed as cold as ice and her skin as white as snow.

The Snow Queen kissed Kai on the forehead, making his heart frozen. Suddenly, in the snow queen story, the little boy forgot little Gerda, his grandmother and his parents. Then she flew him over forests and oceans to her palace. Gerda was heartbroken at Kai’s disappearance. She decided to cross the river on a small boat to find him. Unfortunately, her boat was carried away by the current. Little Gerda was terribly frightened. The boat floated to a big cherry garden, in which stood a small house. Gerda called out for help, and there came an old woman, leaning on a crutch. She pulled the boat with her crutch and lifted Gerda out. Gerda asked the woman if she had seen Kai. she answered that she had not and told her not to be sad but to stay with her, taste her cherries, look her flowers, each of which could tell a story.

The old woman understood witchcraft. She wanted Gerda to stay with her forever, so she smoothed out the girl’s hair with a golden comb, which caused the girl forget all about her little friend Kai. Being afraid that if Gerda saw roses, she  would remember Kai, the old woman caused all the roses in her garden to sink into the earth. Gerda loved flowers of every kind, but she thought one kind was missing.

One day, Gerda saw that the hat of the old woman had a beautiful red rose painted on it. She ran out into the garden to find the one, but no rose was to be found. Feeling very disappointed, she cried. It was a marvel that as soon as Gerda’s tear fell on the ground, a beautiful rose bush shot up suddenly. Gerda kissed the roses. Then she thought of her own roses at home and Kai. She hurried to find Kai.

When Gerda walked through a dark forest, she was captured by robbers. They intended to kill her but their daughter begged to let her keep Gerda to play with. To humour her, they agreed. When Gerda told the girl about Kai, the woodpigeons broke in on their talk that they had seen Kai with the Snow Queen heading up to her eternal castle at the end of the world. The robber girl asked a reindeer to bring Gerda to the Snow Queen’s castle. After running day and night, the reindeer finally took Gerda to the end of the world. Gerda met a woman who was an enchantress there. The reindeer begged the woman to give Gerda the strength of twelve men to overcome the Snow Queen. The woman explained that Gerda already had a great power inside of her, as she had been travelling so far on her bare feet and made men and animals to serve her.

The woman told Gerda the way to the Snow Queen’s palace. It was covered with snow. The snowflakes had strange forms. Some looked like big porcupines, others like knots of snakes. Some were like fierce bears. Gerda ran nervously while saying the Lord’s prayer. Her breathe came like smoke and turned into little angels! The angels struck all the snowflakes and helped Gerda to reach the Snow Queen’s castle safely.

In the largest room of the castle, Kai was sitting alone fitting some pieces of ice into patterns. The Snow Queen promised him that if he could spell the word “eternity” he could be his own master. Although the Snow Queen was away so long, Kai could not spell out this word. He was blue, indeed almost black, with the cold, but he sat there quite stiff and still and looked at his pieces of ice.

Suddenly, the snow queen story took another turn when little Gerda came into the castle. She tried walk through the biting winds. Seeing Kai, she was so happy. She held him close and cried, “Dear little Kai! I have found you at last!” But Kai sat quite still, stiff and cold. Gerda burst into tears. Her hot tears fell on his chest and penetrated to his heart. They melt the lump of ice and destroyed the splinter of glass in it. Kai looked at Gerda and cried, and the mirror piece came out of his eye. He hugged her. The pieces of ice danced about of joy. When lying down, they formed the word “eternity”. So now Kai was his own master.

The Snow Queen suddenly came home. She asked Kai to stay and rule the eternal castle with her. Kai asked the Snow Queen to keep her promise and set him free to go back home with Gerda. The Snow Queen got very angry and created icy winds and asked her monstrous snowflakes to attack Gerda. Kai quickly held Gerda close. It was so marvellous. They glowed a bright light from their bodies, which melted the snow. The Snow Queen cried out in terror.She faded away into the air.

Hand in hand, Kai and Gerda ran way with joy. Wherever they went, the wind stopped, the ice melted and the sun came out. Kai and Gerda returned home together. Everything at home remained unchanged. The roses were still in bloom. They saw each other. They were grown up now, but their friendship was still as close as it had been. After overcoming a lot of challenges, Kai and Gerda lived together happily. The Snow Queen story signifies good friendship that was overpowered by the devil’s magic and melted the eternal ice.

Here is a short visual depiction of “The Snow Queen Story“. See the video story below,