The Sparrow And The Peacock

This is one of the amazing Arabian Tales for kids to read. Once upon a time, in a jungle lived a sparrow. Now, every day this sparrow would go and see the king of the birds.

Every day, without fail this sparrow would be the first to go and the last to come out. Then one day, a small group of birds assembled together on a certain mountain. One of the birds in the assembly suggested that they needed a new king. “There are many of us. And all of us are different, only a king can put an end to our differences,” said one of the birds. So, the sparrow went to provide his counsel. Also, read The Clever Falcon. 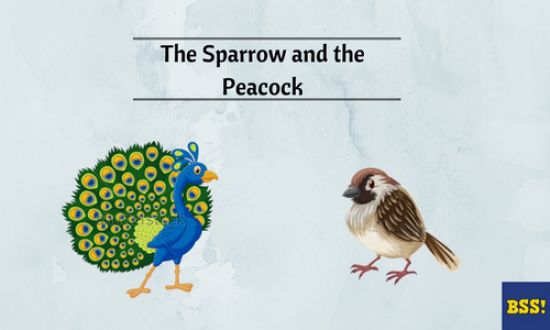 From that day onwards, the sparrow started looking after all the important matters. He also brought food and water for the peacock. Then one day, the sparrow did not arrive at the usual time. This had the peacock worried. When the sparrow arrived, the peacock asked what had kept the sparrow. You may also like to read, The Tale Of The Cat And The Crow.

The sparrow told the peacock that the sparrow had been scared. “Today, when I was leaving my home, I saw a man near my house. He was setting up nets and spilling grains. So, I stood and watched. Then, after a while, the crane and his wife began to pick up the grains. Then, suddenly they got caught in the net. When they began to cry, the hunter took them away to his home. I am scared. I won’t stay there anymore,” the sparrow said.

But the peacock told the sparrow that everything was up to fate and the sparrow should not leave his home for such a small matter. The sparrow believed the peacock and continued his work. But ever since that day, the sparrow exercised excessive care whenever he went out.  One day, when the sparrow was headed towards the peacock’s house, he saw two sparrows quarrelling.

The sparrow could not stand to see them quarrel, so he went to reconcile the other two sparrows. But the moment the sparrow stepped between the other two, a net came flying onto them. And they were trapped.

When the hunter picked them up, he told his helper to take special care of the sparrow that had been peacock’s wazir. “He is the fattest I have ever seen!” The poor sparrow knew it was the end for him. “I was such a fool to believe the peacock. The peacock gave me false security and now look what kind of a mess I am in. I should have been more cautious and left my house. I cannot blame the peacock. Afterall, precautions don’t necessarily mean safety. No one can run from fate.” Also, read The Bull And The Ass.

MORAL OF ARABIAN TALES: YOU CAN TAKE ALL THE PRECAUTIONS, BUT YOU CANNOT RUN FROM YOUR DESTINY.