This is one of the famous folk tales with morals for kids. Once upon a time, there lived a stonecutter who went every day to a great rock inside to a big mountain and cut out slabs for great stones for the houses. “He understands very well the kinds of stones wanted for different purposes,” said the townspeople.

Now, in the mountain dwelt, which now an then help them in many ways to become rich and prosperous. “Do you know, yesterday, the mountain spirit helped me,” said a man. “Oh, really!” said the another man. The stonecutter did not believe in all this but a time when he learned to change his opinion. Also, read The Sword In The Stone. 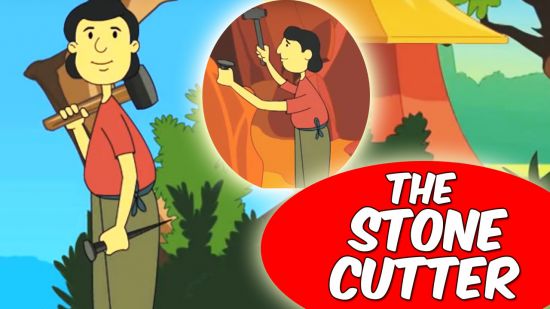 The stonecutter carried a slab to the house of a rich man. After seeing such a lavish life, he wished to become a rich man. As his daily routine, he went to the mountain to cut the great rock and started to think about the silky bed and golden tassels. His wish was overheard by the mountain dwelt and it said, “Your wish is granted!” Hearing the noise, the stonecutter was shocked. That day, he didn’t work much and went back.

When the stonecutter reached his little house, he stood still in amazement. His little hut was converted into a big royal castle for which he wished for. Soon, he forgot about his old life and started to lead a very comfortable life.

One day, as he was watching out of his window, he saw that the Prince was gouing in his carriage with an umbrella on his head. There were many servants around him. Now, he wished to become a Prince. Once again, the mountain dwelt heard his wish and he became a Prince. The stonecutter was leading a royal and luxurious life. He looked around still for something to wish for and when he saw that, in spite of the umbrella held over his head each day, his face grew brown. You may also like to read, The River And The Mountain.

He thought that the sun is mightier than him. This time, he wished to become the Sun. Like always, his wish was granted and he became the Sun. He felt proud in his power. He saw a lovey sight from the top. Everyone was suffering because of heat. But in a short time, he began to grow tired as there was nothing left for him.

Discontent  once more filled his soul and when a cloud covered his face, it hid the Earth from him. He thought that the cloud is even mightier than the sun. And so, he wished to be the cloud. Once again, his wish was granted and he soon became a cloud. He laid between the sun and the Earth. He caught the sun’s beam and held them and to his joy, the Earth grew green again and flower blossomed. Unfortunately, for days and week she bought forth ring till the rivers overflowed their banks. The whole place was destroyed except the rock.

Now, he thought that the rock is the mightiest of all. He wished to be a rock and soon his wish was granted. Proudly he stood and neither the heat of the Sun nor the force of the rain could move him. But, one day, he heard a strange voice at his feet. It was a stonecutter. He realized that a mere child is mightier than a rock. Now, he wished to be a man once again. As always, his wish was heard and he was a man once again.

In the sweat of his brow, he toiled again at his trade of stone cutting. He said, “My bed is hard and I have very little food to eat but I have learned to be satisfied with it and I don’t want to be someone or somebody else!” Also, read Stone Soup Story.

Here is a short visual depiction of one of the famous folk tales with morals “The Stonecutter“. See the video story below,