The Story Of Buddha

This is buddha story for kids. Once upon a time in a happy kingdom of Kapilavastu, King Suddhodana and Queen Mahamaya found out they were going to have a baby. So, the Queen decided to go to his father’s house. On the way, they came to Lumbini gardens where she gave birth to a beautiful baby boy whom they called Siddhartha.

Sadly, seven days later, the Queen died. A wise man named Kala Devala told the King that when Siddhartha grew up, he would see things that would make him unhappy and cause him to leave for the forest. The King, therefore, never allowed Siddhartha to go outside the palace gates. Siddhartha was a bright and happy child who was very caring and gentle. Also, read Eklavya Story. 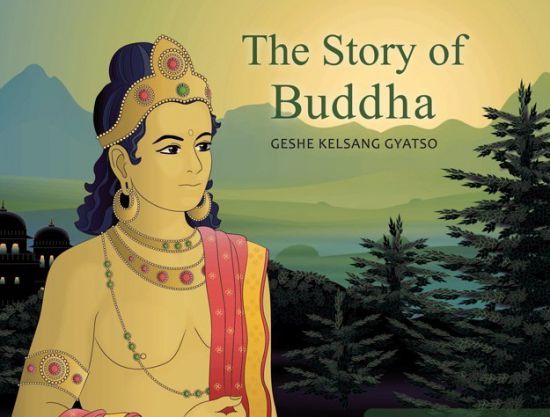 Image Source@ tharpa.com. One day, Siddhartha and his cousin, Devadutta were taking a walk. Devadutta suddenly spotted a swan and shot it down. Then they ran to see the wounded bird. Siddhartha was horrified to see the wounded bird. He pulled out the arrow and applied some herbs over the wound. Devadutta insisted on keeping the bird for himself. So they went to the wise man of the court who declared that the swan belonged to the person who saved it and not to the person who tried to take its life away.

Siddhartha often sat by himself. One day, Siddhartha accompanied his father to watch bull fight, but after a while, he quickly slipped away. He was later found meditating under a tree, quiet and happy by himself.

The Prince grew up and became a young man. King Suddhodana got him married to the beautiful Princess Yashodhara. The King hoped that once he was married, Siddhartha would never want to leave home. But Siddhartha was unhappy in the palace.

One day, he told his servant, Channa, “Let’s go for a ride outside the palace!” On the way, the Prince saw a man bent with age. The Prince had never seen an old man before. “What is that, Channa?” he asked. “This is an old man,” said Channa. “We’ll all grow old one day, Prince!” The Prince was very upset and went back to his palace.

After a few days, Siddhartha went out again. This time he saw a very sick man who was crying out in pain. Siddhartha had never seen a sick man before and so he asked Channa, “Why is that man crying?” “He’s sick and is crying in pain,” replied Channa. Again, Siddhartha was very upset and went back to the palace.

The next time, Siddhartha went out, he saw a group of people carrying a dead body. Channa explained to Siddhartha that he was seeing a dead person and said, “One day, we all will die!” Siddhartha realized that his father had kept him inside the palace to protect him from these things. He asked to himself, “Must we all become old, sick and die? Is there no other way?” You may also like to read, Zeus And The Potsherds.

Siddhartha went out again. This time, he saw a man with a shaven head, wearing orange robes and carrying a bowl in his hand. The man looked very content. He asked Channa, “Who’s that man?” Channa said, “That’s a wise man who had left everything and gone to the forest to seek happiness!” Siddhartha thought over all the things he had seen. He then decided to leave home in search of happiness.

So, one night, while his wife and his son, Rahula were fast asleep, Siddhartha along with his faithful servant, Channa quietly left the palace. They traveled together till they cross the river Anoma. There, Siddhartha took off his royal robes. He gave his clothes and his horse to Channa to take back to the palace. He then put on an orange robe, cut off his long hair and set out with a bowl in hand.

Siddhartha went from teacher to teacher asking, “Do you know the way to happiness?” But nobody could tell him. Finally, he sat under a Bodhi tree and tried to find the answer himself. Many days later, his quest ended. He had now become a wise man and people called him “Gautama Buddha.” Buddha loved all animals and treated them with compassion.

Once, his jealous cousin, Devadutta sent wild elephants to attck Buddha. However, on seeing Buddha, the elephants bowed down before him. Gautama Buddha had many disciples. He went from place to place, teaching people what he had learnt. His students lived in groups called Sangha. He preached that one could attain happiness by being content with what one had and showing compassion to all beings.

When Buddha returned to Kapilavastu, his father, wife and son along with many others became his disciples. One of his relatives called Ananda became Buddha’s faithful disciple and took care of him when he grew old. Buddha preached for another forty-five years. By then, he had become and old man of eighty years.

Finally, at the place called Kusinara, he lay down below the Sala trees and breathed his last. Also, read Prometheus And The Two Roads.

Here is a visual depiction of buddha story for kids, “The Story Of Buddha“. See the video story below,