The Story Of St Patrick

This is the Story of St Patrick for kids. Patrick was born in Great Britain in AD 387. When he was sixteen, he was captured by pirates and taken to Ireland. He was then sold to a tribal Chieftain called Mil Chu. “Chief, Please let me go back to my parents. The pirates took me away from my home,” Patrick said. “What? I just bought you a slave. Go there and look after the sheep!” ordered Mil Chu. “Master, Please be kind,” Patrick requested but he didn’t listen and Patrick had to work really hard for six years as a slave to his master. Also, read St. Patrick’s Day Song.

And then, one night when he was sleeping, the God appeared. The God told him that he had to go back to his home. Also, he told Patrick that a boat was waiting for him which was about 200 miles away but Patrick didn’t think twice. He got up and started running at once. He finally reached there in a few days time. Also, read Easter Story. 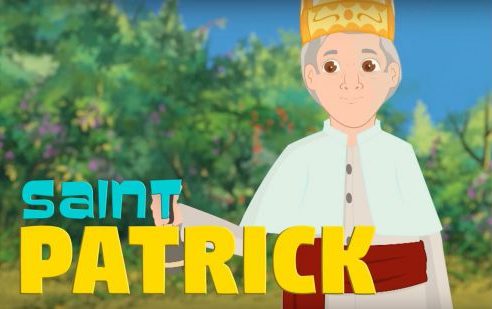 Soon, Patrick convinced the captain after a lot of persuasion and he finally started his journey back home. After many days of travel, Patrick reached home and lived happily for a long time.

But, one day, he received another vision from God. “It is the voice of Irish. We appeal to you holy servant boy. Come back to Evan and walk among us,” ordered the God. Meanwhile, Patrick was learning to become a cleric under Saint Germain. Bishop Palladium was entrusted with the task of evangelizing the pagan community of Ireland by Bishop Celestine.

However, because of the stiff opposition of the tribal Chieftains. Palladium had to discontinue the mission. Based on the recommendation of Bishop Germaine, Patrick was sent to Ireland for the missionary service. In the year 433, Bishop Patrick and his companions landed in Ireland. You may also like to read, Abraham And Lot Story.

While Patrick was on his way to town, he was stopped by the tribal Chieftain called Dee Chu. Dee Chu and his followers had blocked the road. “Where are you going? This is my territory,” said the tribal Chieftain. “I am the servant of God. I have come to this country to speak about Jesus. He is the great God.” On hearing this, when Dee Chu tried to swing his sword at Bishop Patrick, his arm suddenly became so rigid. He couldn’t even move it.

It was then that Dee Chu realized that he was fighting with a holy man. “Pardon me Saint for my ignorance. I will never stop you ever again. Please accept the barn as my gift to you,” said Dee Chu. This barn was later converted to a monastery church and retreat center by St. Patrick. St. Patrick wanted to meet other tribal Chieftains and so Dee Chu gave him an idea to meet all of them at the country’s feast next Sunday.

Bishop Patrick then met another Chieftain named Sexton. He stayed in his house for a few days and the chieftain got so impressed that he got baptized by Patrick. He even allowed his son, Benin to join Patrick in his mission.

It was the day of the feast. All the Chieftains gathered for celebrating. There was a tradition on a feast day where the fire was lit up first at the royal mansion. This was supposed to mark the beginning of the celebrations. Until the fire is lit, the whole town had to remain in darkness. Everyone in the village was given instructions to not light the fire.

It was also the eve of Easter Sunday. Bishop Patrick and his followers were praying at the hill of the slain. As usual, Bishop Patrick lit the pascal lights and this was seen by the Chieftains. “What am I seeing on the hill? Who laid that fire before our monarch did? We need to put out that fire immediately If we don’t, that fire will keep burning in our Kingdom forever,” said the chieftains. Also, read Daniel In The Lion’s Den.

Soon, their King commanded to put off the fire immediately. Lord Niet, the god of War would surround the hill and burn off the fire. As they started praying, dark clouds gathered on the hill.  A huge storm started. As Bishop Patrick prayed, the clouds began to disappear and the wind subsided. They then marched towards the monarch’s mansion.

When they arrived, they saw that the minister Irk was also standing by his side. Bishop Patrick tried to convince Irk about his mission. “Bishop, we have seen what has happened and his highness is convinced about your mission,” said the minister. Patrick thanked the minister.

But the minister had a question. “Bishop, you speak about one God. Then you speak about the Father, Son, and the Hol Spirit. How can there be three?” he asked. “Minister, Father, Son and the Holy Spirit together forms the Holy Trinity. They are one like the Shamrock leaf,” he said. After hearing these holy words, the Minister allowed Bishop Patrick to preach his belief to the people. This was the greatest day in the missionary work of Bishop Patrick. He was victorious over the paganism in Ireland.

Bishop Patrick composed a hymn which goes like this, “I bind myself today, the strong virtue of an invocation of Trinity. I believe the Trinity in the Unity, the creator of the Universe!” Bishop Patrick converted many pagan countries to Christianity.

Once Bishop Patrick was fasting and praying on top of the pagan Eagle Mountain. Bishop Patrick continued the prayers for forty days. Demons gathered together to distract the saint from the fast and prayers. “Go away, you demons. You cannot distract me from my prayers!” Patrick said but demons didn’t go away. When the saint shook the bell, all the demons got scared and flew away. Then the vultures came to distract the Saint but once the Saint shook the bell, the vultures too flew away. Next, it was the turn of the snakes to distract the saint. “I command in the name of the Lord to get out of the country of Ireland forever” and that was the end of the snakes in Ireland. That Eagle Mountain is now called St. Patrick Mountain.

Later, Bishop Patrick was died of old age on 17th March 461 and was buried in Chieftains fort near Saw. The Cathedral of Don is constructed at that place. You may also like to read, The Birth Of Jesus.

Here is a visual depiction of “Story of St Patrick”, See the video story below,