The Straw, The Coal And The Bean

This is one of the brothers grimm stories for kids. Once upon a time, in a certain village lived an old lady. One day she decided to make a dish of beans. So, she prepared a small fire in her fireplace, and to make it burn faster she threw in a handful of straws. Once, the fire was burning properly, she began pouring the beans into a pot. While the old woman was pouring the beans, one of them fell on the ground unnoticed.

The bean fell next to straw, which too had managed to fall off when the old lady was throwing in the straws. Soon after, a burning coal jumped out of the fireplace and landed next to the bean and straw. The straw asks them, “My dear friends where do you all come from?” 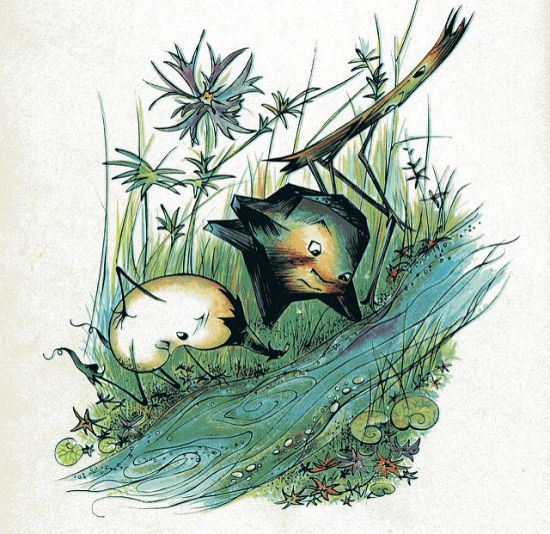 Image Source–> in.pinterest.com. “I,” spoke the coal, “sprang out of the fireplace. If I hadn’t then I would have burnt to ashes along with the rest of them.” The bean spoke next, “I too got away with a whole skin. I surely would have met my end in the pot. The old lady would’ve cooked me along with my comrades.” Now, the straw spoke, “Could my fate be any better? The old lady threw all my brothers in the fire, and I am the only one left out the lot.”

“Now, what should we do?” asked the coal. “Since all of us escaped death,” the beans told them, ” let us run away. If we stay here, who knows what kind of danger befalls us? So, as comrades, we should go together.” After agreeing, all of them set out together. Also, read The Three Little Men In The Wood.

Soon after they had escaped from the hut, they came to a river. Now, the river was flowing fiercely and the three comrades knew not how to cross it. “I will lay down across the river,” the straw proposed. “I am tall enough. You two would make it to the other side in no time. Now, the coal was hard-headed. He stepped brashly on the straw, almost crushing it. As the coal made his way towards the other side, the gushing water underneath scared him. He could not move any further. As a result, the straw under his feet began burning. And in the end, it split into two and fell in the fell in the river along with the coal.

Bean, had been cautiously standing by the river bed. After watching those two, the bean could stop laughing. He laughed and laughed, he laughed so much that he burst. Now, the poor bean was sad, he too would die.But luckily a tailor happened to be passing by. The tailor took a needle and a thread to piece the bead back together. However, the thread was black, and ever since that time beans came to have a black seam! You may also like to read, The Ora Woman In The Woods.