The Sword In The Stone

This is The Sword In The Stone Story for kids. In the ancient times in England, there lives a boy whose name is Arthur. He is the son of the King. The King wants Arthur to become a King one day. But some bad men want to kill Arthur because of his father’s rivalry so that they can become King. Merlin, who is very close to king takes Arthur to live with King’s best friend, Sir Ector. Sir Ector brings up Arthur. You may also like to read, The Jungle Book Story.

One day, the King dies. England needs a new King. “Where is the King’s son?” the people ask. No one knows where Arthur is. The nobles fight about who will be the King. There is a lot of trouble, and people become poor and hungry. Seeing this, Merlin is worried about England. 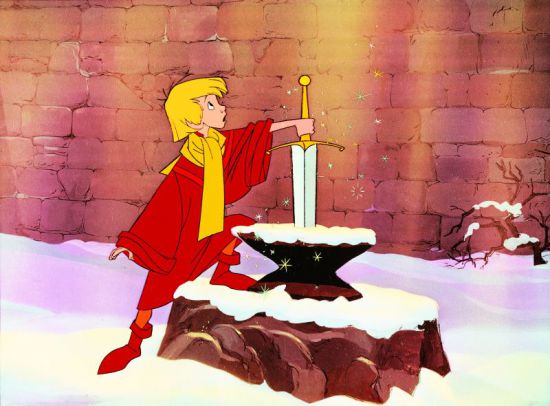 the sword in the stone

Image Source–> bibliobulimica.wordpress.com. Soon, Merlin makes a magic sword. He puts the sword in the stone. He tells the nobles, “The man who can pull the sword from the stone will become the King of England.” The nobles all want to be King. One by one, they try to pull the sword out of the stone. They try and try, but no one can pull out the sword. No one can be the King.

No one can be the King. As England has no king, it is not a good place to live. The nobles are fighting about becoming the King. Some people die because of this. No one is happy.

Everybody forgets about the sword. They live with no King. Merlin watches Arthur grow. Arthur becomes a young man. He is not strong, but Merlin sees Arthur is kind, wise, and good with people. Merlin tells Arthur about the sword. “But I cannot become the King,” says Arthur. Merlin tells him about his father. He shows Arthur the sword. Also, read Peter Pan Story For Kids.

Soon, many people come to watch and gather in a big circle. Some strong men try to pull out the sword. But they cannot even move it. They laugh at Arthur, too. They think he cannot pull the sword from the stone. But, to everyone’s surprise, Arthur pulls out the sword! He is the new King of England. Arthur is a wise and a good King. England becomes a happy place once again!

Here is a visual depiction of, “The Sword In The Stone”. See the video story below,

The Sword In The Stone Story Video